My Father's Dreams of Obama

Eight years ago tonight, my Dad, Walter, left a Super Bowl party and died in his sleep. On each anniversary, like others on Facebook who've lost loved ones,  I usually post a classic photo (like the one above) a brief tribute, and get a lot of sympathetic "likes."

But this year feels like something more is in order.

I realized it had to do with an email he sent me and my brothers after election night 2008 -  that I wound up quoting in his eulogy not two months later.  He died only 12 days after Obama's inauguration.

Dad was a lifelong Republican - but a bygone species of moderate sometimes referred to as "Jacob Javits Republicans" - who last voted for a GOP Presidential Candidate in 1968.

All my life, Dad hadn't been that communicative about his emotions. My mom (a lifelong Democrat, whose dad was a labor lawyer) was the, shall we say, expressive and dominating partner . The two of them were inseparable - literally. At some point we surmised they had never spent more than a few consecutive days apart their entire 49 years of marriage.

She died suddenly at 70, in October 2007, of an aneurysm, while swimming. (He had found her and had jumped in to the pool fully clothed trying to rescue her, but she'd died instantly.)

After all those nights in a couple, in his solitude he uncorked a new (or rather, hidden from me and my brothers) frankness that gave us a new relationship with him.

He would often go to Mets games solo, leaving her seat empty rather than trying to replace her companionship. and confided to us that at bedtime he often "spoke" to her.

Here's the email he sent after Obama's election.


NOVEMBER 5 2008
Obama's win was an historical event in our country's history.  It is hard to overstate its meaning, the full extent of which will not be known, probably, in my lifetime.

I feel proud of our country, in a way that I have not fully felt for many years.  Hope is what has gotten us through one crisis after another during the 20th century, and is what we can cling to into the 21st.

And in Obama I think we have a president who has the intellectual capacity to seize the opportunities that make hope a reality  As someone who served in the armed forces, and who has made the ideals of Boy Scouting a central part of his lifetime, I am happy to see a  person in the White House who shares my belief that the leadership of our country on the world scene, as we had during World War II, is the most important gift we can make to humankind.

I talked to Mom about this at length, aloud, last night, and felt her with me as I dropped off to a deep and dreamless sleep.

I keep wondering what Dad -- an Eagle Scout who lobbied for years to try to get the Boy Scouts to accept gay scouts,  an ROTC Navy Lieutenant,  a private-practice estates and trusts lawyer who did pro-bono and reduced-rate lawyering for churches and prison education and homeless outreach, and a tireless local volunteer, including a 2-year stint as the mayor of my hometown -- would think of the pendulum swing that occurred this election.

I imagine it might be something like how my folks in their seats behind first base at Shea Stadium reacted when the Mets - inevitably -- imploded.  Let's just say, there was a lot of...expressed emotion.

As they headed to the parking lot, however, they did not swear off the Mets or baseball or the traffic jam forever. They knew the season was 162 games long. And if the Mets didn't make it to the playoffs, there was always next year.

I'm trying to keep that in mind. 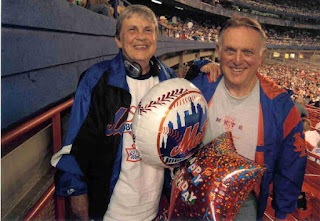 Posted by David Handelman at 2:02 AM

What a wonderful piece of writing. I hope you share it widely!

I've been thinking about this a lot. I'm old enough to remember back before the GOP was this rabid band of lunatics. My dad is registered Republican and my mom reg D and I grew up thinking - even though I was 'a Democrat' (in school) as far back as Mondale/Ferraro - that they were two honourable sides of the same coin, the coin being we all want an honourable America that works for everybody, we might disagree on how to get it. How do we get back to that?

@Kim -- thanks for reminding me to add the fact I forgot at 2 am - that my mom was a lifelong Dem.

A "Jacob Javits" Republican, hadn't heard that in awhile! Our father was fortunate to see Obama make it in, as well, and expressed similar feelings. Wonderful share, thanks, David.

Thank you, David. This is something special. I am so glad your father saw Obama's campaign and election and I agree with him entirely. I don't expect to fully understand the importance of his election and service in my own lifetime. But I totally agree that what we do when we lose is get busy making plans for the next season. God Bless, Jim

p.s. my dad, too, was a lifelong Republican and my mother a Roosevelt Democrat. I'm pretty sure he voted for JFK since Nixon was a dirty word in our house after his pink lady campaign against Helen Douglas in California.

Your parents were very special people, David, with an incredible love for each other, their family, and the Mets. Their loss must still resonate, but they live on through your own passion for our country and the Metropolitans. Your Dad would have been pained about the new president, but very excited by the Mets starting pitchers. If only they only could have seen Thor. :)

"Hope is what has gotten us through one crisis after another during the 20th century, and is what we can cling to into the 21st." Those are words I certainly needed to hear this morning, this week, this awful month. I'm grateful to your dad for writing them, and grateful to you for sharing them in this lovely piece. He set a great example for you and for us all.

David - It's hard to believe its been eight years...
This was a terrific article and a beautiful tribute to your dad. He and your mom were a wonderful team. They certainly would be puzzled and dismayed by the current state of things politically, but I know they would be equally thrilled and proud of the way you've been advocating for what you strongly believe. I certainly have appreciated it.
Thanks.
Let's go Mets.

David - Beautiful piece. Inspiring and encouraging during this difficult time, as you dad often was during good and bad times. I know you know how special he was to Elizabeth and me and of course to my dad. Coping with the Mets, I suppose, is the perfect metaphor for our times. --Matt

Thank you for this thoughtful and loving piece, David. Maybe there will be enough rolling in the graves to trigger the zombie apocalypse. That Eagle Scout picture sure looks like you. Like the Mets, we've got our work cut out for us.

Loved reading this, and seeing their smiling faces. I remember being surprised when they went to Cuba (if memory serves), among other parts of your Dad's political profile, which I learned more about at his memorial than I had known in his lifetime. While I would have wanted my mother to have lived longer, a silver lining of her going first was my getting a chance to become close to my father, now that neither of us had my more expressive and spontaneous mother for available for solace and understanding.

This is beautiful David. I don't know you and didn't know your parents but they sounded like a wonderful couple. How lovely that your Dad, a republican, would vote for President Obama and be so happy about his win. That says a lot for him. How do you think he would be feeling now? with this president? I hope you don't mind my asking. I actually thought you were going to mention. I am sorry for your losses. Respectfully, Paulette

A wonderful piece, David. Thank you.