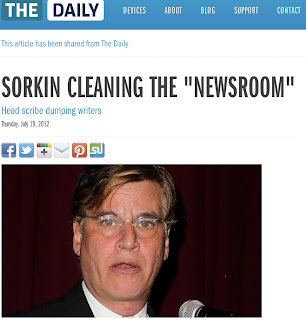 "I'm sure you've seen this," someone emailed me, with a link to the story on a website called "The Daily" about Aaron Sorkin cleaning house on the show I'd worked on, HBO's The Newsroom.

Actually, I hadn't, nor had I ever heard of the website before. (Thankfully, I at least already knew the news, having been notified by email the previous week, because sometimes in this business, as with my last job working on Eliot Spitzer's show at CNN, you learn such news about yourself from the press.)

What troubled me, more than the public nature of my personal job situation, was the reporting -- which got cut and pasted and parroted endlessly over the next 24 hours in places from The Hollywood Reporter to Entertainment Weekly to New York magazine's Vulture column to the Huffington Post, The National Review (!) and way, way many other places.

It was inaccurate and lazy.  As it drifted through this aggregator foodchain, maybe one writer would add some opinionating to it, like Grantland, but none of it was based on any further reporting. Nobody has the budget to do anything any more but repeat, and the rush is to get it on your website fast before people start going to someone else's website instead.

Basically the information in these dozens, perhaps hundreds of stories, remained the same four bullet points: 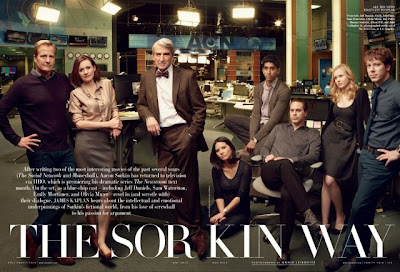 The sum total of reporting, as far as I could tell, was one unnamed "source" who said he'd fired everyone but his ex-girlfriend. The Hollywood Reporter led with reporting that contradicted this -- yet still repeated it:


According to HBO, the Aaron Sorkin drama set behind the scenes of a cable news network is replacing about half of its writing staff, though one source close to the show tells The Hollywood Reporter that everyone on the show's writing staff except for Corinne Kinsbury has been let go.

Even Grantland, which decided to make a "point" about the firing, did so with a lot of hyperbolic extrapolation and presumption:


The real question is whether this was a par-for-the-course power move from a controlling showrunner or the first sign that the very noisy drumbeat of criticism... has reached Sorkin’s well-tanned ears. While it’s never a good thing to see anyone out of work, it’s the second scenario that’s preferable. Just like his unlucky in love male leads, Sorkin’s undeniable gifts are always at their best when paired with a tough-minded foil, someone who will stand up to the speechifying and push back against the predictable plots...

Anyone wanting to find out how to spell Corinne's last name need only have looked at IMDB, or even Google. They might have even had fun with the fact that she had a cameo in episode 5 as the stripper. Even better, they might have found out what she actually contributed to the series, which was a lot of the 20-something romantic plotlines. But instead it was enough reporting to just say "ex-girlfriend."

Anyone wanting the accurate number of writers who were cut -- or chose not to return -- could have found out with a well placed phone call or two. Anyone who really believed Sorkin employed eight writers to merely do "research" needs to really examine what that would mean. And anyone who thinks nobody in the room "stood up" to him doesn't have any concept of what the real, very hard and rewarding job of writing for Aaron is.

Writing for Sorkin -- and I have done some for all four of his shows -- means throwing 100 ideas at him that he will reject 99 of. That he will belittle and wrestle and often turn into something else. But he walks into the room every episode not knowing what he wants to write, and walks out with episodes finished.

We all worked really hard for him, beating out plots, scenes, historical scenarios, speeches, etc., for him to put in his genius machine. Yes, he writes the scripts.  And, unlike when he was up against network deadlines and 22 episode seasons, he even rewrote them, to notes from producer Scott Rudin, HBO, and yes, even the writers' room.

Also: why didn't anyone research HBO's statement? Was there this much turnover between seasons one and two of Sex and the City or Sopranos or Six Feet Under or The Wire? What about patterns in Sorkin's hiring?  The two seasons of Sports Night, the four he ran West Wing --  he never had the same writers' room twice. Why is this?

There are a lot of potential answers, it's not my place to provide them here. But back when I was reporting for Rolling Stone, at least one reporter would have tried.

Speaking of reporting, that huge April Vanity Fair spread on The Newsroom included this little parenthetical aside about Scott Rudin by writer James Kaplan: "(And, who, I should note, has optioned my 2010 Frank Sinatra biography for film.)" Were no other reporters available? It's the kind of blatant conflict of interest VF editor Graydon Carter would have flagged in his days at Spy. And if I were in Kaplan's shoes, I wouldn't have felt comfortable taking the gig. But that thinking makes me a dinosaur.

What's scariest about the propagation of this particular simple-minded news story is that I actually know something about it, so I can see the holes. So it means there's a lot more out there I'm reading that is just as unvetted. In the internet-dominated era, how often are we digesting information that has been similarly turned into presumed knowledge and hardened into fact, almost impossible to unravel or correct? 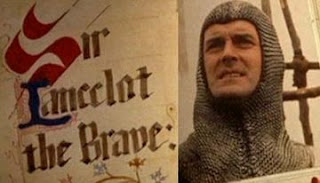 "I offered Richard the service of my Free Lances, and he refused them... thanks to the bustling times, a man of action will always find employment." -- Maurice De Bracy, Ivanhoe

This is not a rare occurrence. In fact, the last time I held the same job two years in a row, Bill Clinton had not yet met Monica Lewinsky. My eldest -- who is now heading off to college -- was one year old.  The longest job I've had since then lasted 11 months. My friends and extended family have given up trying to navigate my cascading resume. 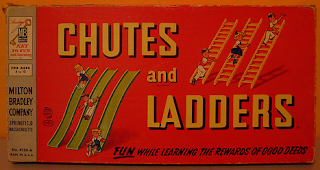 This is not what I envisioned adulthood to be. I thought you'd get a job and climb a ladder, or at least make steady progress based on talent, accomplishment, merit and fairness.

(Note: I also didn't think you had to exercise to stay in shape.)

When I got out of college, all I knew is that I didn't want to spend three more years in school, become a lawyer or work for my father. To my parents' chagrin, I turned down the only job offered to me -- reporter at the Raleigh Times, paying $15,000 a year -- and took a stand: I published my first national magazine article about how you could go home again to find yourself.  (Way ahead of the curve of the boomerang generation.)

Very cocky, but I didn't really know what I was doing. I temped and worked as an editorial assistant and got a few freelance assignments. By the time I finally landed a real job it took almost long as law school would have taken.

I recently had a Proustian revisit of that first job. In one of those freak YouTube occurrences, someone posted a video tour of the Rolling Stone offices in 1988 on the occasion of the final day of my coworker Brant Mewborn. It was clearly a time before people were accustomed to video cameras.

If you're curious, my embarrassing segment begins at 4:15 mark. The Atex terminals we used to put out the magazine is only one step ahead of the people who calligraphed bibles for Gutenberg.

For me the real revelation was how I'd decorated my office walls, which I'd totally forgotten. I lived in that office for more than four years. Then I had an office at Vogue for another four years. Since then I have occupied many offices, desks, carrells, but the most I do is bring in photos of my kids and partner. I know not to get too settled.

When Aaron Sorkin left The West Wing in 2003, I was the only writer of 11 who immediately cleared out my office. I didn't want to have to go back to fetch things later if I was let go. As it turned out, eight of us weren't asked back.

The experience -- and, I'm sure, my then-recent divorce -- taught me it's better to assume a job isn't going to last, and be pleasantly surprised when it does, than presuming the opposite and being caught without a parachute.

As I look around me, more people of my generation seem to be in the same boat. Whether it's editors who pinball from one job to another, college professors who are forever "adjunct" instead of tenured, newspeople who jump from network to network, it feels like there's little security. I just happen to be one of the more extreme versions.

From the outside, my career looks dynamic and exciting. I have worked for Jann Wenner, Anna Wintour, Aaron Sorkin, Jane Pauley, Aaron Brown and Eliot Spitzer. I interviewed the Beastie Boys, Madonna, Puff Daddy, Motley Crue. I have jetted back and forth between the coasts.

Just this past week in the hallways at my summer job writing for Good Afternoon America -- which couldn't be more oppositeland, content-wise, from my previous gig writing for Sorkin's Newsroom -- I passed Michelle Pfeiffer, Barbara Walters, Blake Lively, Rielle Hunter, LMFAO,  and the surviving Jacksons. All those folks have name brands. Even Rielle Hunter. Me, I'm still "freelance."

This kind of career is nothing new, really. As the opening quote from Ivanhoe attests, it's been around for centuries, and will endure as long as there are "bustling times." (Perhaps "May you live in bustling times" should be the freelancer's creed.)

How has it affected my personality?

Some days I marvel at my own resilience. I honestly enjoy every new experience and the amount of smart, talent, diverse people I get to interact with. I think it has made me much less of a snob and appreciative of a wide range of styles.

But other times, I feel a kinship with jittery Alvy Singer in Annie Hall,  living in a house under the Cyclone roller coaster.  It's a colorful life, but it's tricky to keep the cereal in your spoon.