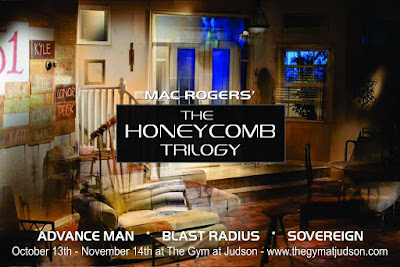 When I signed up for a seven-hour marathon of theater in a church gym about bugs taking over the earth, the last thing I expected was it to be relevant to current events - or that it would give me hope for humankind.

But that's what happened when I attended closing night of the crazy-genius Honeycomb Trilogy by the promising playwright Mac Rogers.

The night before, ISIS had wreaked terror in Paris, killing over 100 people, and I had to wake at 4:15am the day of the plays to go in to CNN to produce an hour of live coverage anchored by Michael Smerconish as the (heart-)breaking news still was developing. It's what CNN does best but you wish it never had to do it.

It was one of those seat-of-the-pants broadcasts where behind the scenes guests kept being moved in and out of slots as different technology glitches and availabilities shifted underfoot - and the writing for the teleprompter was often still wet when Smerconish was reading it.

Right before the gifted Christiane Amanpour went on the air live with the deputy mayor of Paris, someone in the control room suddenly wondered aloud: "He's going to speak English, right?" Luckily he did. (Looking at the playback now (right), I see we had the wrong clock code on the screen, showing NY time instead of Paris.)

Smerconish did a great job - even booking two of the guests himself the night before while on a Stairmaster - and pushing back when guest Mike Huckabee turned the actions of ISIS against all natives of the countries where it's housed. Afterwards we all went home to nap.

But I had to wake up to get to the first of the three plays, which started at 2pm  My girlfriend and I had first heard the plays touted by a Facebook friend who works in theater, and I then read the Times review by Alexis Soloski, whose taste I trust.


an exhilarating D.I.Y. saga at the Gym at Judson, imagines an Earth subjugated by an apian race. Over the course of these ambitious dramas, which you can and should see in a marathon showing, a Florida family introduces, abets and opposes these insectoid overlords, the People of the Honeycomb.

It certainly promised to be unlike anything I had seen in decades of New York theatergoing - half of the curiosity was how the hell they would pull it off on a single set.

Just before heading into the theater on Washington Square South, we noticed that groups had assembled in the park to memorialize the killings in Paris, and a French flag had been hung in the Arch (which Stanford White had modeled on Paris's Arc De Triomphe.) (right).

How homespun an experience were we in for? The person behind the lockbox checking off our names from the ticketbuyers list was the playwright himself.
The set was a drab American living room, and the large, committed cast totally was attuned to Rogers' witty and lively scenario  The plot involves a group of astronauts who return to Earth from Mars

Read more »
Posted by David Handelman at 12:23 PM No comments: Links to this post 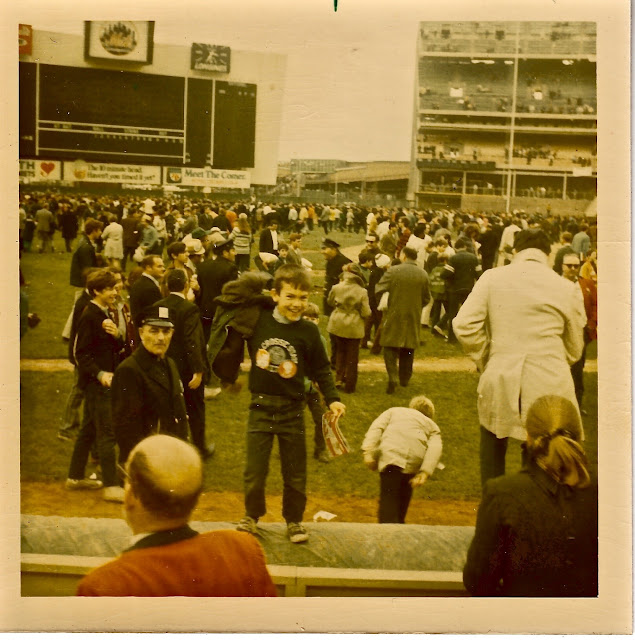 The Mets weren't supposed to be anywhere near the World Series in 1969, or in 2015. But they got there both times. And so, somehow, did I, attending Game 5 of each. But the tales are quite different -- and not just because of the disparate high/low outcomes.

In 1969, you couldn't buy tickets the same day as the game from your computer.  Designated Hitters had not yet ruined the sport. You couldn't buy a lobster roll at the stadium. Pitchers regularly pitched complete games. The winning players' World Series bonuses were $18,338. And Fox Broadcaster Joe Buck (right) was only six months old, so he couldn't yet be held responsible for being a babbling idiot.

Even though the New York Metropolitans weren't born until a year after me, I was predestined to root for them.

My mom grew up in Brooklyn and had snuck into Ebbets Field with her nanny to watch Jackie Robinson play. So there was no WAY I was going to root for the Yankees.  My dad luckily had been a New York Giants fan, so when both teams moved West for the 1958 season, they got married, and waited around for a new expansion team to be formed from a draft of cast-offs from around the league with names like Choo-Choo Coleman, Marv Throneberry, and a couple of over-the-hill former Brooklyn Dodgers to get fans out to the ballpark (which in 1962 was the Giants' old Polo Grounds), including Clem Labine, Don Zimmer, Joe Pignataro, and Gil Hodges. Their debut record was historical: 40 wins and 120 losses.

Mom kept cheering. She wasn't just a lifelong sports fanatic. her moods literally rose and fell with the daily travails of her teams. She listened to hockey playoffs on a transistor radio at temple services (I'm pretty sure she cursed out loud when circumstances turned dire), wrote letters to the Port Authority to complain about construction on the Whitestone clogging the road to Shea Stadium, and later in life frequently called the sports radio station to opinionate as "Judy From Scarsdale." She had elaborate superstitions about causing the Mets to do well or not, one of which included saving a half-eaten Nestles' Crunch bar for years in our freezer because she'd been in the middle of eating it when something Amazin' happened.

As the first-born, I knew no other way to live. She took me to my first game in 1968 when I was seven and she soon took all three sons. We sat in the top deck, seats were $1.30, and I learned to keep score.  Way before fantasy leagues were a twinkling in Las Vegas's eye, I was playing make-believe baseball games in my room with playing cards and dice, keeping track of batting averages and ERA. I sent self-addressed stamped envelopes to players c/o Shea Stadium and got back autographed pictures. I went to signing events and met them in person.
And I started keeping scrapbooks.
By starting when I did, I got an incredibly warped sense of how easy it is to win a World Series. Because in my second season of conscious fandom, the hapless Mets,

Read more »
Posted by David Handelman at 2:50 AM 8 comments: Links to this post