Fred Stoller's entry into my life was emblematic of his personal gestalt -- which he's turned into an unlikely career.

You know when you're at a cool party and then someone latches on to you and they're kind of annoying but persistent and you can't shake them and then you give up and realize there's something inimitable about them that is compelling?

We met at one of those parties you always imagine take place in Hollywood yet never dream of getting invited to. But in 2002, during my year on West Wing, my Rolling Stone buddy David Wild brought me to the home of Everybody Loves Raymond creator Phil Rosenthal, who has hosted Sunday night movie screening pizza parties [right] with his wife Monica Horan (who played Brad Garrett's wife on Raymond) since they met in New York in the 80's.

Among the two dozen or so guests were several character actors, writers, and the like. The house was beautiful but not ostentatious; the entry hall was hung with framed autographs Rosenthal had collected from his idols, including, if I'm remembering right, Billy Wilder.

Before that night's screening of Woody Allen's Radio Days (Rosenthal had been re-screening all of Woody's movies) I hung out in the kitchen and ate slices from pizza boxes off the large island (apparently Phil has since upgraded to pizzas from Mozza), and eventually out of the cast of characters emerged -- Fred.

Fred was tall, lean, anxious, nasal-voiced and Brooklyn-born. He told me he'd been working on a memoir about his piecemeal, freelance experiences on the fame's fringes called "Maybe We'll Have You Back" - -the noncommittal statement told by TVproducers to itinerant guest stars like Fred their entire careers.

I was wary, but intrigued.

I'd been a big comedy fan since childhood -- and written a lot of journalism about comedy, including editing two special issues of Rolling Stone on the topic. And I had never read or heard of a book told from the point of view of someone like Fred. Someone like, well, these guys:
Stories from a journeyman character actor about how different stars behaved, of rating gigs by how good the food is, of trying to fit in and make enough of a mark without stealing the stars' limelight(s).

Read more »
Posted by David Handelman at 12:59 AM 5 comments: Links to this post I'd hoped to spend this three-day weekend relaxing and catching up, but instead I got angry. And maybe that's what MLK would have wanted.

A friend mentioned that HBO [full disclosure: my current employer] was airing all three Paradise Lost documentaries, in conjunction with the premiere of # 3. I was only vaguely aware of them, and at first thought they illustrated three different topics on a theme. So I set the DVR. 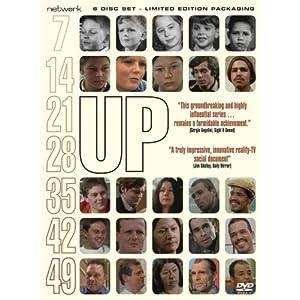 What I discovered, glued to my chair for seven hours, was that instead it was like a hellish version of Michael Apted's ongoing Up series [left] -- following the same characters from different economic strata over decades. (The most recent PL showed at the New York Film Festival, got a DGA nomination and is nominated for the Documentary Oscar.)

In the case of Paradise Lost, it took three documentaries and a mind-blowing 18 years -- plus the involvement of celebrities like Eddie Vedder, Johnny Depp and the Dixie Chicks -- to rectify the miscarriage of justice that wrongfully convicted three innocent Arkansas teenagers in the murders of 3 eight-year-old boys.

Read more »
Posted by David Handelman at 8:38 PM No comments: Links to this post 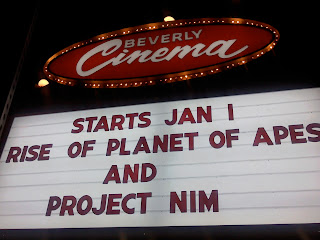 This is clusterflick season -- when studios jam the multiplexes mining for Oscar gold. Theoretically I could be going to a new movie nearly every night. Yet in the past two weeks I found myself preferring to go to revival houses -- three times.

I am not delivering a screed about how they stopped making good movies in 1980; in fact, two of the three movies were 2011 releases I had missed on the big screen. But I am weary of Oscar season, our meager reward for enduring another summer of ever-worse remakes and sequels. (Eight of 2011's top eleven grossing titles so far were  sequels -- the other two were Thor and Captain America -- and   Mission Impossible 4 is still climbing into that list.)

Last night I had a lively debate with an erudite couple who had the polar opposite reaction to me on two Oscar contenders: Young Adult (they liked, I hated) and The Help (I liked, they hated). That's what makes this a ballgame, I guess, but I wonder if in a year or two we will even remember which movies were nominated.

I have enjoyed some of this year's crop -- most thoroughly The Artist [left] -- but I can't argue with people who didn't like it, and also have been wildly disappointed by several

Read more »
Posted by David Handelman at 7:05 PM No comments: Links to this post 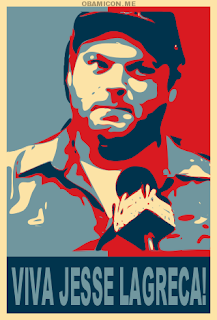 2011 was a tumultuous year -- internationally, nationally, in Facebook redesigns, and, in some smaller ways, personally.  That means I should have been blogging more, not less.

Yet as I got swamped by year-end round-up articles, I realized -- not only am I still catching up on early episodes of Homeland -- I haven't written a post since the Charlie Sheen Roast, which was so long ago that one of the roasters has since passed away.

Along the way I posted on Facebook -- frequently -- about things like the NY Times' egregious overkill on the tragic Stamford fire. A blogger can get lazy when there are more readers and respondents there than here.

But the self-taskmaster in me says it's time to catch up. My nominees for heroes of 2011 -- in a moment. First, some thoughts on the vexations of Blogging, which most people warned me had to be "branded" (i.e., single-topic) and needed a consistent publishing date and frequency for it to ever amount to anything. I got the most page views when I wrote about my past experiences with cult figures -- Terrence Malick and Albert Brooks -- but I didn't want to get stuck writing rehashes of pieces I had sworn off writing in the first place.

As much as I intended "Hands On" to be Unmediated Me, a few months in I got hired at CNN and was warned to be "careful" about what I wrote.  Rumor had it that someone had recently been fired for simply writing on Facebook about company layoffs -- which had already been public.

And when I was enlisted to write the show blog for ParkerSpitzer, my very first entry got me in trouble -- all I did was describe Eliot tripping over the  gate on Kathleen's office door protecting her blind rescue dog. My boss thought it was fine. Eliot and Kathleen thought it was fine. But I got called on the carpet. Turns out there was some sort of corporate policy against any pets at the office that Kathleen had skirted; I had unwittingly provided an exposé. I was relieved of my show blog duties.

Journalists often step in it without even realizing they've done so. Back when Beverly Hills Cop 2 was coming out, Rolling Stone assigned me the Eddie Murphy cover story.

But before I could meet Eddie, I was told his manager, Bob Wachs, wanted to "vet" me. He told me he had rejected another writer because he didn't think Eddie would get along with her, mainly because she was a woman and "Eddie always runs around in his underwear" and his posse asks questions like "Did you fuck her." I somehow passed THAT test but then was told I also had to interview the film's producers first.

I dutifully showed up to meet Jerry Bruckheimer and his partner, the late infamous Don Simpson, and asked as many polite questions as I could to satisfy their egos.

At one point I mentioned the fact that Eddie had a team of two managers, Wachs and his Comic Strip co-founder Richie Tienkin, and asked them about their own partnership and how things were divided.

After this meeting, I found out that, unbeknownst to me or anyone else, Eddie's two managers were in midst of a fractious split-up, and that Jerry and Don had decided I was doing an exposé. The interview with Eddie was cancelled. 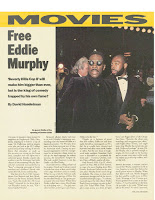 I ended up writing a snarky piece about Eddie being surrounded by Yes Men and handlers called "FREE EDDIE MURPHY" [left] that covered things like a paternity suit, his obsession with Elvis, and his poor choices in movies, and the magazine went with a Paul Simon Graceland cover. Murphy's career has only recently recovered from the slight. (Joke.)

After ten years away from such maneuverings, I hoped to be able to write a blog that -- even when looking back at such pieces that I had been happy to leave behind -- would shed some insight into showbiz, TV writing, journalism, parenting, divorce, and anything else that moved me.

But even after leaving CNN in August, I found myself again having to be a cautious blogger, because my new job -- writing for Aaron Sorkin's HBO series set in the world of cable news -- is also closely guarded. 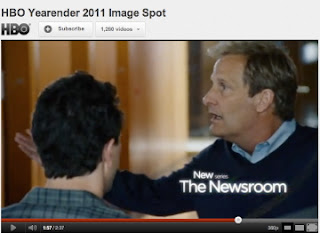 It won't air till next summer, and all HBO has shown is a brief nondescript shot [right] in its trailer for 2012. I couldn't even brag about Jane Fonda being cast as the Ted Turner-like mogul until it was old news.

Meanwhile, rabid fans are already circulating old versions of the pilot script, which has led to a lot of frustrating misinformation in the blogosphere -- including even the name of the series, the name of the fictional network, and the last name of the anchorman played by Jeff Daniels.

What I can tell you is that the challenge of the show ideally will be what will make it pay off. Unlike The West Wing, The Newsroom is set in the real world -- i.e., instead of fake Senators and Presidents and Supreme Court Justices, we're dealing with the real ones, and the news that's being covered is from recent history. The pilot takes place on the day of the BP Oil Spill; by the time the series airs, that will be more than two years in the past: long ago enough for the details to now be murky -- and to add some perspective -- yet recent enough for it to still have relevance. Some days in the writers room our brains explode but when it clicks, it's beyond rewarding.

There's my roundabout transition to bring me to my own take on recent history: the people who for me gave 2011 oomph and hope amidst a dismal economy and troubling political grandstanding.

1) JESSE LAGRECA (pictured up top)
It started out with an iPhone video. An unassuming guy at Occupy Wall Street being interviewed by a Fox News reporter, trying to get the OWSer to criticize Obama and the alleged "lack of message" provide the kind of soundbyte Fox would air. Instead he schooled the Fox guy so thoroughly that the interview didn't air. But a bystander's recording of the interaction wound up on YouTube and turned Jesse LaGreca into an articulate leader for a leaderless movement. He ended up on NPR (at one point appearing on a panel with Spitzer), speaking at the Capitol and elsewhere and gave me hope that something might actually come of the sit-ins. If nothing else I hope he runs for Congress.

Read more »
Posted by David Handelman at 2:50 PM 11 comments: Links to this post