That's what people from all over were asking as we weathered Hurricane/Post Tropical Storm Sandy.

Our answer felt kind of embarrassing. Because when the storm hit and divided the city into the haves and have-nots, we fell above the power-grid equator of 30th street. So all we had was extra vacation days, impetus to take long walks, and survivor guilt.

And I did a lot of posting on Facebook. 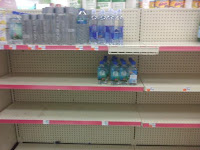 I mean, of course we heeded all the warning preparations.  I went to the local supermarket and CVS where people had cleared the shelves of bottled water and batteries and candles [right], but otherwise supplies were plentiful. Back home, we filled a tub with water "for non-drinking purposes" in case the power (and thus water pumps) went out, brought in the furniture from the balcony and closed up the windows.

Then it started to get warm so we opened them again. With nothing else to do but wait, we began catching up on back episodes of Homeland and Breaking Bad. I mean, a lot of episodes.

I went on Facebook to see the News Feed.  There was a kind of almost giddy energy to the anticipation, mixed with skepticism about all the dire prognostications. 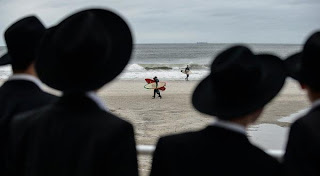 People shared fun photos, like the one in the New York Times of Hasids gathered at the beach watching surfers before the storm hit [right], or the photoshopped tracking map that likened the storm's progression to its namesake in Grease as she got progressively skankier. 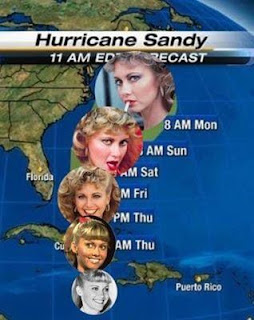 Others made jokes about how they were still finishing up their supply of Y2K crackers and water.

It started to feel like we had been hyped. By noon Sunday, city area schools and businesses had already announced they'd be closed both Monday and Tuesday. Friends -- especially those living north of the city, where they had no real weather change yet - starting griping. By Monday 4pm, all the city had experienced was some drizzle. Yet the subways shut down at 7pm, and the buses  followed at 9pm.

Sure, we heard the accelerating wind whistling through closed windows like a tea kettle. Felt the 100% humidity, saw the wall of clouds in the sky.  So we kept switching over to TV news to make sure we weren't missing something.
And I began trying to be useful the only way I could -- making my Facebook "News Feed" literally that, sharing updates both large and small. At first, most of my postings were meant to entertain during the endless wait, but soon things got serious. 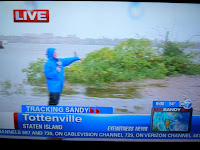 Early on, local and national news reporters were mostly notable for their hypocrisy,