We are drowning in surveys. I'd be saying that even if it hadn't been the year of a Presidential election (one which, by the way, proved the utter ineptitude of endless polling). All month we've been getting what amount to survey results about movies, music, books, photos, stories of the year. (The Chicago Sun-Times email this week helpfully declared this the "Year of the Cubs and Trump.")

Our constant loop of feedback has weird consequences: Jan. 1 2017's Sunday Times just arrived with an entire printed section consisting of the "Most Read, Shared & Viewed" Stories of 2016 (reminding me of when TV shows used to run "clip" episodes with characters having flashbacks to save production costs).
When the Internet started, we were all lured into voicing our opinions: not just the things we bought on Amazon and eBay, but the sellers themselves. Not just a Facebook post or Tweet, but our comment on others'.

More recently, the convenience and economy of Uber comes with the price of having to rate our drivers - and be rated by them.  (The main result I've noticed is the increase in forced personal interaction with drivers.)

The "Nosedive" episode of Black Mirror earlier this year (right) took the social cost of such ratings to their illogical conclusion, where lives were ruined by bad numbers.

For a while, I gamely played along
with being surveyed. It's like mouthing off online (or on a blog) - but with direct access to the intended target! Who doesn't want to reward good things and punish the bad? When United Airlines emailed me after a flight to ask what I thought, I gleefully reported back their utter baggage handling incompetence (at $25 per bag).

But as I looked back through recent emails I realized it's gotten totally batshit. I've been asked to fill out dozens of surveys just in the last month - every time I go to a play, every time I buy a product, every time I speak to a human being in an Apple Store or on the phone. It's fucking exhausting, and often would take longer than the transaction itself.

Clearly companies need to know how they're doing. And sometimes we do want to let them know when we were really happy (Apple replaced the defective cord even though the warranty had expired!) or sad (you packed the cat food so poorly the bag ripped open in transit! - resulting in a new free bag, of course.) E.g. Your play was stupefyingly inert and I will not renew my subscription if you keep up such tripe!
But the combination of most of them disappearing into the unanswered void, and the inbox's insistence on every single fart getting a rating has neutralized the utility of the transactions.

Plus, aren't we getting surreptitiously surveyed enough via our Facebook likes and posts? (By the way - every time you take one of those "Quizzes" about which movie star you're most like or where you should be living, all you're really doing is transmitting personal data).

I dutifully vote every year in the Emmys and Writers' Guild Awards - and the elections, even when it's just for a local councilperson - but if they want me to spend any more time on my purchases, they're gonna have to pay me. 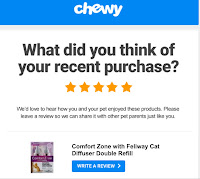 So: The same way I hang up on robocalls, I am now deleting these nagging cheerful entreaties without blinking. (Sorry, Chewy, you just have to guess what I thought of the cat pheromone diffuser refill.) This has its own satisfaction. But also its own consequences. If I resist the urge to write back to Home Depot's countless emails about that drawer track to tell them I returned in person to a store weeks ago because it didn't fit, I am freeing up my life for other pursuits.
BUT. I am also letting the people who DO take the time to fill these out have all the power.
We often have our lives controlled by people we will never meet -- the Nielsen families, for instance, although Netflix and Amazon have helped free us from those shackles.
And this year's election and its aftermath have shown the perils of non-participation. I worry if we leave all this feedback to those who have the time and energy we'll end up hastening the consumerist aspects of the film Idiocracy (whose relevance to the election has already been well-documented).

Almost to mock my decision, Hertz recently sent me the most basic of surveys. It seems almost, well, Idiocratic. 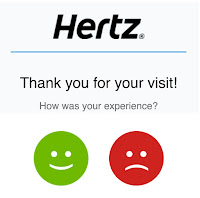 As my finger hovers over the touchpad......please tell me what you think of this post.

Posted by David Handelman at 3:37 PM

I've been encouraged to send out a survey to my clients. There's a lot to learn from the experiences your customers have.

I used to be the oddball that actually got excited about telephone surveys. I would often sit down, put my feet up and answer every single question which the surveyor posed. They asked the same question three or four different ways. They ask me questions that, to me, have no clear connection to the product or service. I did this partially because in the back of my mind I always felt like there was a possibility that if I completed the entire survey that they would offer me a free bag of Doritos or whatever. But most of the time I would complete the entire survey just to hear the Glee in The Voice of the person on the other end of the line to whom I was answering. I finally figured out that there was no real incentive for me but there was quite possibly a bag of Doritos at stake for the person who was asking the questions. So I wanted to make their day. Unfortunately, I no longer have a landline so my charitable survey days are over. Now there is no escape from this endless online onslaught of surveys and polls and quizzes and evaluations. You're right. It IS exhausting! And it all started with that nasty little "like" button.That is "Patient Zero". I LOVED this piece.

Great piece, and a great idea. At my Toyota dealership the service guys habitually alerted me that I'd be getting a survey from Toyota, and anything under a 10 (on a scale of 10) would be considered failing, so they encouraged me to mark a 10. I got so sick of this that not only did I mark them down (for harassing me), I eventually took my business elsewhere.

I enjoyed this piece. Three minutes of my time well spent. I will continue to read your blog posts. Happy customer. ❤

Love this piece! What we used to call focus groups in the pre-internet era have turned into survey culture. I'll read the other reviews to see what I should think of this post. Survey says: Great piece, great idea!

Running a script competition, we need to know where entrants heard about the competition so we know where to continue marketing. I HATE asking for any time from anyone because we are so overloaded with info and emails and tweets. I didn't do it last year and it is something we need. It's a moment and if it's done with a personal touch (I realize large corporations cannot do this well) i think it's OK. I am torn but the feedback is helpful. As for my responding, I do it if I actually have something to say like you did with the baggage fee. Otherwise, it's usually so distracting and intrusive to my computer that it opens up other tabs, etc... Ugh, first world problems???