I used to read a lot more. (I used to write more, too, but that's for another time.) Specifically, I read more books. After my kids arrived, I started reading to them at bedtime, and for many years that served as my book time. I sort of fell out of the habit, except on vacation.

And since the incursion of the internet, I have mostly been reading things I click through to -- newspaper, magazine, blog....okay, cat videos, too -- anything but a book.

Partly my fall-off has to do with the sense of urgency conveyed by the Internet. Also with my now needing reading glasses; I'm more likely to listen to a podcast.

But it's also about my lack of patience. Most of the things I read (or listen to) online, I can finish in one sitting. Books require the kind of commitment that I only get -- or afford myself -- on vacations. (I am not one of those hardy citizens who can read literature on subway trains or in Starbucks, grabbing half-chapters here or there. I need a purer environment.)

And my to-do list keeps piling up exponentially. When I moved two years ago, I shed boxes and boxes of books I had once read or would never read, or had inherited from my parents -- and still wound up with more than our new shelves could contain (and more than I will ever read).

2012 also delivered more than the usual tumult of distractions: I worked four jobs (five, if you count temping), moved back to NYC from L.A., saw a kid off to college, and of course there was all that stuff to read about the election. Meanwhile, I kept going to friends' book parties, buying the books, and piling them on a chair. I kept hearing about other books I "had to read" and would take comfort if someone said an ending was disappointing. Bullet dodged!

Before December, the only book I finished was The Art of Fielding, a nicely observed thinking-person's soap opera set at a smalltown college, revolving around a baseball phenom and his tormented mentor. I enjoyed it, but thought, well, that the ending was disappointing. It was a solid double; I still craved a home run.

Heading to Christmas break, I finally chose to crack the one friend's book I had been half-craving, half-avoiding: The End of Your Life Book Club, by Will Schwalbe, in which he recounts the final months of his remarkable mother's life as she's treated for pancreatic cancer and they both read a lot more books than I will read in my entire adult life, and share insights into books, living and, of course, dying.

"We are a pretty awkward society when it comes to talking about dying," Schwalbe muses two-thirds of the way into the book. "It's supposed to happen off-stage, in hospitals, and no one wants to dwell on it too much." What he's accomplished is an approachable, human way of discussing death -- even with the person whose life is slipping away.  As he says, his mother taught him "reading isn't the opposite of doing -- it's the opposite of dying."

I was craving it because I knew their discussions would provide useful shorthands on dozens of books I might never get to; I was dreading it because I had both my parents die suddenly, in 2007 and 2009, with hardly any of the preparatory time Will had been afforded to make the most of his time with her.  And though I did get my dad to do his oral history, instead of doing it as a series of interviews with me, as I'd envisioned, he chose to dictate it at work and have his secretary type it up -- of a piece with his personality, which was always concerned worried about "to-do" lists and formal when it came to emotional stuff.

Will, a former book editor himself who started the website Cookstr, is more of an acquaintance or Facebook friend (that modern term); we'd met through a mutual friend 20 years ago, he wrote a book with another mutual friend, and we occasionally run into each other. So however he presented himself in the book would be as new to me as if reading about a fictional character.

Soon I was identifying with all his inner torments: about his tendency to make superficial connections between people without considering the consequences, or to interrupt people with his own anecdotes instead of really listening and appreciating theirs.

In many such self-deprecating moments, Will is comparing himself unfavorably to his mother Mary Anne, who is, by any standard, a truly remarkable woman. After attending Brearley, Harvard and drama school in London, she went from working for theater producers (once wearing Rosalind Russell's fur and jewels back from London trying to pass them off as her own), to admissions officer at Harvard, to college counselor and then head of upper school at two tony New York private schools, to a late in life career as an activist for international refugees, visiting danger spots, working with lepers, amputees and mutes, and organizing a national library system for Afghanistan. All the while remaining a deeply religious person. Even in the hospital, she would see someone who couldn't afford medication and write a check for them on the spot. How could he help but feel inferior?

But in one aspect, Schwalbe is very much his mother's equal: he's an avid, avid reader. In bookstores, besides the usual happenstance ways we all find books, he adds, "superstitiously, I almost always feel the need to buy any book that I knock over."

And so when Mary Anne was diagnosed, it didn't take them long to hit upon the organizing principle to their new extra time together at doctors' appointments, chemo infusions, and the like: They would read, or reread, books, and discuss them.

The authors are as diverse as W. Somerset Maugham and Moshin Hamid and Thomas Mann (aided by Ritalin, she plows through Mann's 1500-page Joseph and his Brothers, one of the few Will, without pharmaceutical aid, simply gives up on). The subject matter might be the mind-body connection, spirituality, contemporary autobiography, or dated period pieces. They even read my friend Sheila Weller's book Girls Like Us about Joni Mitchell, Carole King and Carly Simon. They don't always agree about the books, they don't always even like them, but they always learn something from them.

The lessons are both simple and profound, and worth remembering. They read Patricia Highsmith's lesser-known. partly autobiographical The Price of Salt, originally published under a pseudonym because of its lesbian love story. Mary Anne tells Will the protagonist reminded her, "When you walk around New York, or really anywhere, you see so many people like that young woman -- not desperate but still sad and lonely. That's one of the amazing things great books like this do -- they don't just get you to see the world differently, they get you to look at people, the people all around you, differently."

And Will extrapolates from that discussion why his mother always -- sometimes exasperatingly to him -- took the time to acknowledge nearly everyone she encountered: strangers, store workers, receptionists, nurses.

And his own book becomes the culmination of his mother's example. Seemingly effortlessly organized around chapters titled after just some of the hundred or more books discussed, it's actually an incredibly complex and life-affirming journey, exactly what one needs when one is feeling overwhelmed.

Will's whole life, his mother demanded prompt thank-you notes from him and his siblings, and tried to impart them that the thanking itself was a pleasure. He didn't get it.

Then in the book, when she's getting sicker, he starts trying to write her one for a Christmas present and gets stymied; he kept straying into what he thought was a premature eulogy.


What I suddenly understood was that a thank-you note isn't the price you pay for receiving a gift, as so many children think it is, a kind of minimum tribute or toll, but an opportunity to count your blessings. And gratitude isn't what you give in exchange for something; it's what you feel when you are blessed--blessed to have family and friends who care about you, and who want you see you happy. Hence the joy from thanking.

So -- thank you to all my friends and family this holiday season. And thank you, Will Schwalbe. 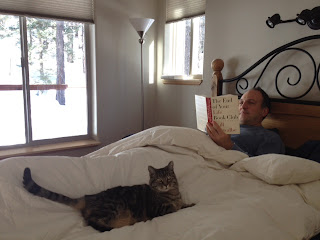 Posted by David Handelman at 5:42 PM No comments: Links to this post