Triumph Lost and Found at the WGA Awards

Awards shows might look glamorous on TV and in pictures, but in person, they're often a slog to sit through - even if you're nominated, but especially if you're just an audience member.  Long-winded thank-yous, irrelevant claptrap, long walks from the balcony to the podium.

But this year's Writers' Guild East Awards (a parallel ceremony was being staged live in LA simultaneously) - because of a perfect storm of host, presenters, political situation, nominees, victors, and honorees -- was remarkably rewarding and entertaining for me. Not just as a member, or as a TV viewer, but as a former journalist And it ended with a hilarious near-tragedy-turned comedy, involving Triumph the Comic Insult Dog's missing trophy.

Though I've been part of the nominated shows in the past, this year I was there as a member of the Guild's activities committee, working as a volunteer, drawn partly by the host - The Daily Show's Lewis Black - as well as the promised presence of Wire creator David Simon, on hand to present an award to his fellow Baltimorean John Waters, and I was hoping against hope as a TV viewer that The Americans, written and shot here, would finally win a much overdue award.

I had the happy task of ushering New Yorker writer Jelani Cobb, who produced the Frontline documentary Policing the Police and was being given the first Walter Bernstein Award,  for writers "who have demonstrated with creativity, grace and bravery a willingness to confront social injustice in the face of adversity." The award is named after the Blacklisted screenwriter hero - who is still sharp at age 97 and was sitting at the table with Cobb (left) - a living testament to standing up to governmental malfeasance.

From the get-go, the proceedings had a special charge to them. It's hard to explain how much harder the East Coast community of writers has to work to succeed in showbiz, which prefers everyone to be under its eye and thumb in L.A. -- and have stuck to their creative guns while doing so. Among those in the room: Simon, Waters, Tina Fey, Kenneth Lonergan, Jill Kargman, John Patrick Shanley, Americans showrunners Joe Weisberg and Joel Fields, the staffs of John Oliver, Seth Meyers, Trevor Noah, Colbert,  as well as unionized broadcast news journalists like our President, longtime Bill Moyers writer Michael Winship.

The intro to Lewis Black - another inveterate New Yorker who I first encountered when he was staging plays by aspiring playwrights like Aaron Sorkin downstairs at the West Bank Cafe in the 80's - correctly stated, "He was the voice of Anger in Inside Out, and was also the voice of anger in literally everything he's ever done."

He spoke of watching Trump's recent press conference while trying to write his monologue, "and I was forced to realize yet again that we are living at the intersection of satire and reality." 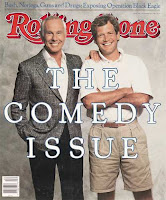 I had one personal agenda for the night: Before the ceremony, I tracked down Steve O'Donnell, former Letterman head writer who was getting the Herb Sargent Award, who, with his twin brother humorist Mark, had written a piece for me at Rolling Stone
in 1988 when I edited its first Comedy Issue with his then-boss on the cover alongside Johnny Carson (Left) (Yes, that's how old I am.)

Mark -- a sweet soul who wrote the book to the musical Hairspray as well as one some of my favorite humor pieces ever, including the June 1980 Esquire classic, "The Laws of Cartoon Motion"  - (example: "Any body suspended in space will remain suspended in space until made aware of its situation. " -- the reason I reached out to  him to execute this idea -- had died suddenly in 2012  (They had eight-- eight! -- other siblings.)


So I wanted to take the opportunity of being in the same room with Steve to give him a copy of the issue.  He didn't have one and was incredibly gracious and grateful.
The Herb Sargent Award is named for the late first SNL head writer -  the grown-up in that anarchic room (see photo, right), who had written for everyone from Steve Allen to Johnny Carson, who died in 2005. (I'm also so old I attended SNL rehearsals when Sargent was the head writer.)

The award is for a writer who embodies Sargent's "spirit, commitment and comic genius" as well as "his dedication to mentoring new writers."

O'Donnell displayed all that, and more. After a tribute by colleague Steve Young and a taped intro from bearded Grizzly-Man-Letterman (who ended saying "Your first wife always hated me") O'Donnell gave a midwestern humble speech claiming the award committee had confused him with some other writer -- naming many, many people he thought worthier, including Letterman's first head writer, Merrill Markoe, SNL legend Jim Downey, and Chris Elliot.  He also named Mark, saying in that case the confusion would be understandable "since we were identical" slyly adding that Mark was "such a writer - and so, so handsome."

The speech disproved O'Donnell's own observation that comedy writers are "such big babies!"

Mark O'Donnell would have liked to see the tribute to his Hairspray source, John Waters, by David Simon, which included this sentiment:


"Fuck 'Normal.' There is no 'Normal' Normal is a lie....a prison...'Normal' is a fascistic sentiment, and one that prevailed in the American experiment for far too long. Indeed today in this country, we are seeing a last retrograde and reactionary assertion of whatever 'Normal' is supposed to be."

After a bunch of in-your-face clips from his work, Waters closed his speech by quoting a line from his most recent film,  A Dirty Shame:


“Make a list of all the people you fucked, and then apologize to their parents.”

“See? I got an award for writing that line!” Waters exclaimed. “Anything is possible.”

But for me the icing on the cake was the appearance of Triumph the Insult Comic Dog, who, in a stroke of genius, had been enlisted to present the children's programming awards. As Triumph himself explained,  “I guess the WGA thought it would be fun for the children’s category to be presented by a foul-mouthed puppet—but unfortunately, Sean Spicer wasn’t available.” 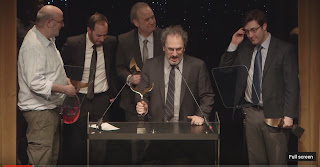 Triumph had already won a WGA award earlier in the night, defeating the Oscars, Golden Globes and Emmys with his 2016 Election Special. Smigel dubbed the subset of his writing staff on hand to accepting the award "a parade of Jews."
"People for years have told me how funny I was doing Triumph, but there are a million joke writers" -- he pointed behind him to Monk creator Andy Breckman, Nathan For You creator Michael Koman, standup David Feldman and Conan writer Josh Comers. He bemoaned the fact that all his Triumph jokes later were going to be about losing so "we have a lot of work to do." 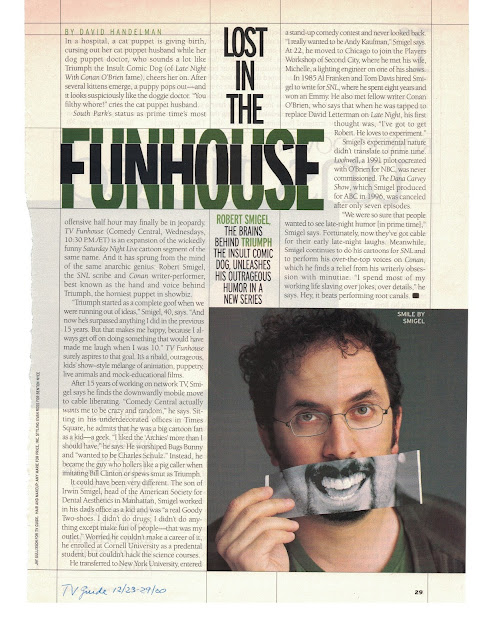 But he did end up losing the award. More on that in a second.

I had profiled Robert Smigel, the genius behind Triumph, for TV Guide (right) back in 2000 when he had a series on Comedy Central.

He'd already been a writer on SNL (including the animated TV Funhouse segments) and Conan. But even back then he knew Triumph - which started as a goofy voice he made up when his wife gave him the puppet -- might end up being his most long-lasting contribution to comedy.

(He's also used comedy to fight autism (he has a son with autism), spearheading the annual "Night of Too Many Stars."  )

Triumph made me cry with laughter.
After the ceremony ended, I approached Smigel to congratulate him, but he was distracted.

It turned out that while he was on stage performing as Triumph, he had stowed his trophy backstage - and it had gone missing.

This was bad. The volunteers had actually been warned to keep their eyes on the trophies because they are pricey (and remember Tom Brady's missing Super Bowl jersey, now valued a half million?)

I ran around asking employees of the Edison Ballroom if they'd seen it. I asked fellow volunteers if they'd nabbed it for safekeeping. But nobody knew what had happened.

I returned to the scene of the crime and looked under tables, on the floor, and then -- in a garbage can, face down -- there was Triumph's trophy. I couldn't tell if it had been tossed there or fallen in, but it was definitely his -- the name was engraved right on it.

I ran it out to Smigel, who was relieved but also wanted me to take him backstage and show him the exact place it had been. He was flabbergasted. But Triumph had been snatched from the jaws of defeat. (PS: THE AMERICANS WON!)