The Pool Disrupter (An Election Parable) 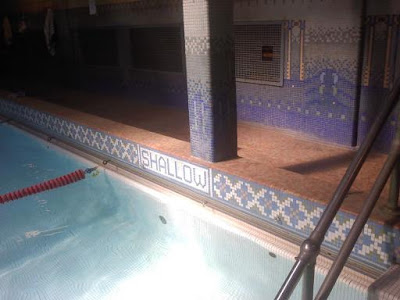 Swimming is what I do for exercise and for mental health - the latter more than ever this election cycle when I've been working at CNN and having to immerse myself in the daily morass.

But I was reminded again this morning, there's one swimmer who keeps making it difficult for me to lose myself - and the situation has echoes of the campaign.

Public pool lap swimmers are generally a collegial, accommodating bunch. We all have our routines, but we understand that since we have chosen to exercise not on a lake or on a solo elliptical machine at the gym, we have to pace ourselves and dovetail with our fellows.  If there are two swimmers, you split a lane. More than two, you swim in counterclockwise circles. Some pools even designate "slow, medium, fast" lanes to help sort things out.

But some people just don't care - about others, rules or decorum. 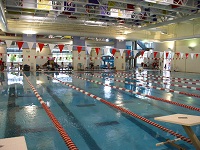 Case in point: One day last summer I was at the excellent community pool in Durango, Colorado (left), and found 10 of the 11 lanes had two swimmers sharing. So as is customary, I stood at the end of the 11th, and when the lone swimmer arrived, I tapped him on the shoulder to inform him we'd be splitting it.

His reply was shocking. "I don't do well with splits." He turned and headed back into hogging the lane.  Instead of crowding two other swimmers, I waited for someone else to finish and took her place.

That was a one-time incident. But the situation at my neighborhood rec center pool in Harlem is chronic. I was ecstatic to discover the beautiful tiled space when I moved uptown 6 years ago, and I have adjusted my life to match the Parks Department's limited lap swim hours, during which orange cones are set up by the lifeguard to designate them slow, fast, medium, respectively. 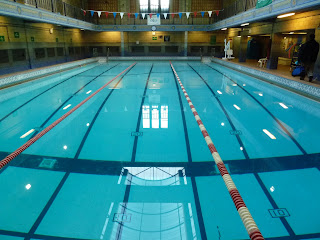 Over the years a melting-pot group of regulars - African-American, Asian-American, Arab-American, Latinos, Caucasians - is usually partaking of the M/W/F 7-9am slot. Among the most memorable a 90-year-old woman who paddles the whole time on her back; a 90-pound woman who swims entire laps underwater along the pool bottom; a bearded guy who wears no goggles yet zooms past most of us; an elderly guy who works out with water barbells in the deep end, and a heavyset man who does some lackadaisical water exercise in the shallow end of the slow lane but mostly harangues anyone else in earshot.

Then there's the Big Guy.

When I first enter the pool room, I know what kind of workout it will be if The Big Guy is in the water. He's retirement age, well over 6 feet, pear-shaped, probably 300 lbs., and he swims a full 90 minutes three times a week.  His pace is very very very methodical (ie slow), taking elaborate, wide-swath flip turns at each end, which would be fine if he were in the slow lane. But

Read more »
Posted by David Handelman at 1:45 PM 3 comments: Links to this post