Midnight for My Oasis 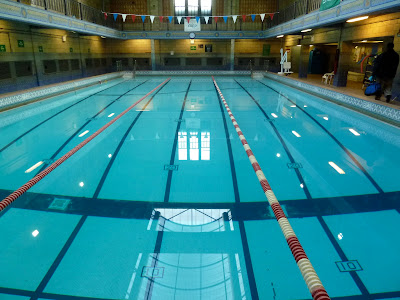 Living in New York City can be amazing or amazingly frustrating. Sometimes one episode encapsulates both simultaneously. That happened today, when I was part of a group of regulars who showed up for a last lap at our local swimming hole on the day before it was to close for renovations.

We never made it in the water.

First, the amazing part: The fact that the place exists at all. I'd lived in Harlem almost two years before discovering there was a beautiful community pool hidden less than a mile from my apartment.

After moving uptown, I discovered I could walk to the weekday summer lap swimming at Central Park's Lasker Pool. But what about the other 10 months, when Lasker returned to its Clark Kent alter-ego as a skating rink? (I hate running, barely tolerate elliptical machines. I bike and swim. I prefer lakes, but the city won't let people swim in the Central Park reservoir. Yet.)

The pool I thought was the closest, in Riverbank State Park [right], built as trade-off for the Hudson River sewage plant beneath it, took me almost as long to commute to as it did to swim my mile. It had difficult hours and closed randomly for things like thunderstorms and private classes.

Then a fellow Lasker diehard touted the Harlem YMCA, so I checked it out, but the pool was in a cramped room and on a different floor than the locker rooms, and the lapswimming hours required a spreadsheet.

I found the 1925 gem Hansborough Recreation Center  by stumbling on another blog -- 40 Pools, in which a "New York-based pool tourist" named Hannah Bergeson celebrates her 40th birthday by swimming in 40 different pools, along the way creating a kind of consumer guide for people like me. Membership to the city's municipal pools is just $150 a year, a fraction of what health clubs, gyms, or the JCC would charge. I headed north to check it out. 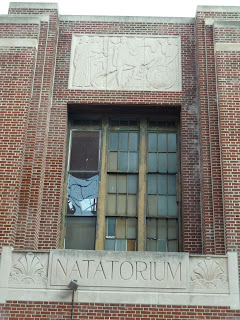 The exterior (above) wasn't promising, the entryway was a little dilapidated, and the locker room had seen better days.

But on the other side of the locker room door....