A Death in the Musical Family 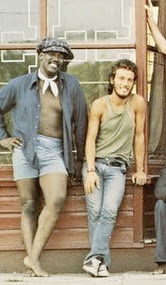 R.I.P. Clarence Clemons. It is truly the end of an era.

The E Street Band was the closet approximation to a family I ever saw on a rock and roll stage. After keyboardist Danny Federici died of melanoma, the family soldiered on, but it's hard to imagine anyone replacing or subbing for Clarence's signatrute throaty tones or onstage bravado.

When I saw the band on the last tour there was something in the air that felt like it might be the last time we were all in the same room together -- maybe Bruce sensed it too, that's why he did some cncerts where they performed entire albums start to finish, to make sure he touched all the bases.

I first saw Bruce and Clarence play at New York's long-gone Palladium in 1978 -- that's 33 friggin years ago. I once drove all the way to a little bar called Lock, Stock and Barrel in Fair Haven, NJ on the rumor that he was going to be playing - -and he was, with Southside Johnny, Garry Talent and a guy named Stormin Norman on piano. (Thanks to Google, I found this nice tribute Norman wrote when Clarence was ailing.)

I posted some videos on Facebook but this is a more permanent place to put them.

I am an Emmy voter. And boy was I happy when buried in the mailbox onslaught that included discs for Gene Simmons' Family Jewels and George Lopez and Lifetime movies and that Kennedys atrocity, I got the complete set of the 13 episodes of Friday Night Lights final, fifth season (above). Last night I devoured the last three episodes, which will air in the next couple of weeks on NBC.

Well, not devoured, really, I kept hitting the pause button, to wax nostalgic over a familiar face like Adrienne Palicki and Jesse Plemons who had graduated and left seasons ago -- but really,  to just extenuate the inevitable final lights-out. Because nothing like it will come this way again any time soon. A realistic show about people with realistic relationships, feelings, hardships and triumphs in this era of Jersey Shore, Glee and Desperate Housewives, was a major miracle.

It's part of the sad saga of FNL's undeservedly checkered airing career that instead of there being a hugely anticipated finale night like The Sopranos that everyone tunes into at once, many people will have already seen it.