How do we keep it together during times of chaos?


"Happy to say I'm taking some time off to get my head/body together (right now they're in different time zones) but I had to cancel my plans for a walk-on-deserted-beaches sojourn because of family responsibilities...I wonder if I could run a few possibilities by you wonderful people?"

His ideas ran the gamut from Meditation and Psychedelics, to Electroshock and Gastric Bypass, to Public Service. (Already attempted: lying in bed all day with the shades down reading a long book about targeted killings by the Mossad.)

He asked if we had any other suggestions.

It was half-kidding, but, in days like these, half-not.

Many of my friends and I feel worried about the sky falling. (Indeed, tragically, just before Christmas a woman was killed by a piece of a building near Times Square.)


Reading my friend's post, I realized I hadn't written on this blog in more than a year - since before the midterms! The last one I felt compelled to register had been about the bomb scare at work.

So what have I been doing since? Immersing myself in what I'm learning to think of as the Culture Cure.

First and foremost, I continued writing (and rewriting) a play - my first - about George McGovern, Thomas Eagleton, and McGovern's daughter, around the issue of mental health, the Presidency, and the conflict between public and private lives.

Audible sponsored a developmental reading at the Minetta Lane Theater with an amazing director and cast that helped my next revise. And also continued my hard-won wisdom on the realities of the theater marketplace.

Meanwhile,
I have thrown myself headlong into culture consumption.

I've always been an avid consumer of theater, music, art, movies, books, and nature, but in this era it has taken on an almost frenetic pace. Just ask our cat Nico.
After being rejected from Hunter College's Playwriting MFA Program, I set about my own theater education. I'll trek to an afternoon reading in a small upstairs space of a work in progress about David Mamet writing a play about Harvey Weinstein. Or a playwright's master class about writing a musical even though I will never write one. Or the monthly Gravid Water show at Upright Citizens Brigade where actors learn scenes and improvisers arrive onstage not knowing what play they're in.

Last summer I was especially proud to see (3x) my older daughter's NYC directorial debut, about a six year old girl who wants to be a boy (and her annoyed 4 year old brother), which got deservedly well-reviewed and got the playwright published. 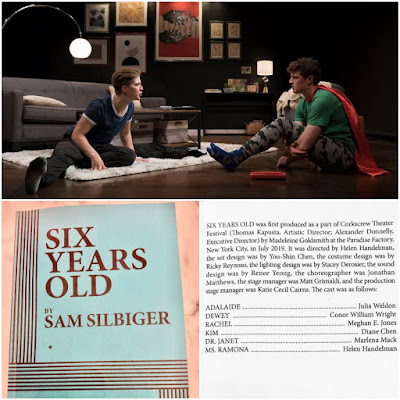 But this past week in early January was unusually packed.
Often accompanied by my intrepid brilliant, creative artist partner Syd, I saw:

(Friends of ours happened to star in one of the plays, be both the book's author and interviewer, and the painter having the opening. But that's not always the case.)
Yes, this breakneck gorging is sometimes exhausting - I nap more than I used to.

But conversely it has also proved more revivifying than any anti-depressant. Art and culture keep cracking open new vistas on the world and responses to it, much-needed brain food beyond the daily newschurn or frustrations.

* * *
Art isn't just a respite - it directly addresses current events. And the passionate and thoughtful response is different than that in the newspaper or on cable news. Peggy's book tackles young boys attitudes toward sex; Soldier's Play is about racism and the South and the military.

During my trip to the Met I was stunned by the giant painting in the Great Hall called "Resurgence of the People" by Kent Monkman, a takeoff on Washington Crossing the Delaware: 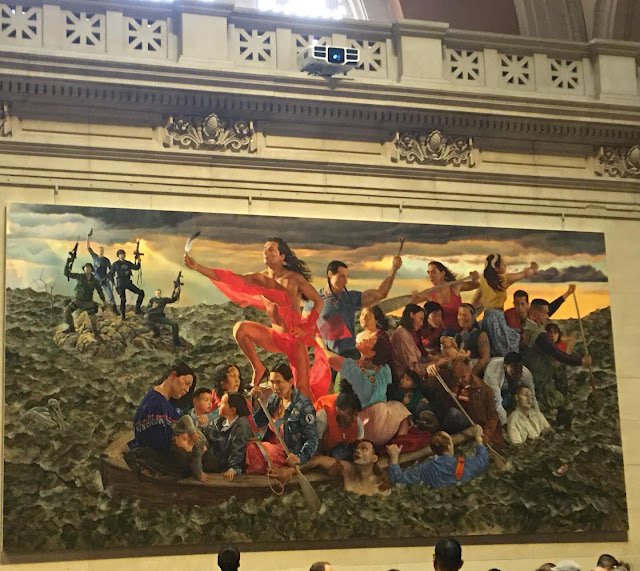 The Whitney Craft show included much social commentary, including these two pieces - Cupboard VII by Simone Leigh from 2018, a sculpture depicting Black womanhood using a pot and a grass hut: 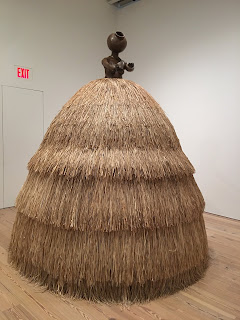 And Elaine Reichik's 1998 needlepoint Sampler (Kruger/Holzer) that includes the timeless 1977 Holzer quote about abuse of power. 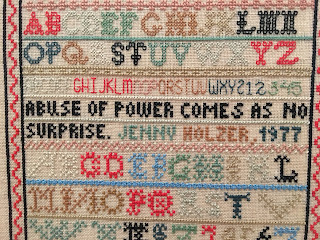 Then walking in East Harlem over the weekend, I stumbled on a giant street mural tagged by @killertaco666 that included this piercing figure: 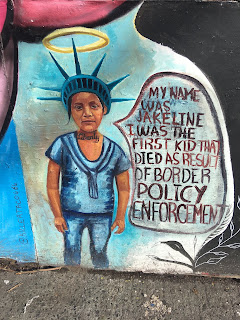 And - in the middle of writing this post - I ducked out to see another play - How to Load a Musket by actress Talene Monahon (who, incidentally, had starred in the Weinstein/Mamet workshop). 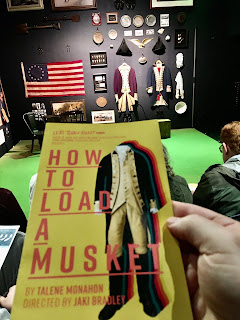 Musket starts out as a docutheater piece based on interviews with re-enactors of the "Rev" and Civil Wars, but during her research, Trump and Charlottesville complicated, darkened and deepened the research, wrestling with not just old history but where we are and where we are headed.

So the art cure isn't merely about avoidance, but processing.

* * *
The other thing I did that week was furthering my biggest act of self-care this past year - spending three hours in Central Park's 36-acre Ramble, learning the maze of paths and inspiring history. 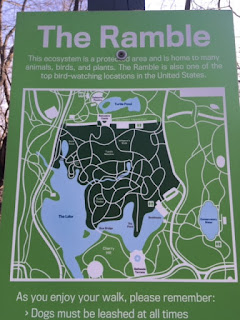 Back in October 2018, when the bomb scare evacuated us from our offices, CNN was still in the Time Warner building on Columbus Circle. So we were directed to take refuge just inside the Park's southwest corner.  It helped soften the freak-out.

Two weeks earlier, I had attended a community meeting intending to gripe about my beloved pool being shuttered and replaced by the Central Park Conservancy, the non-profit group formed in 1980 that runs the park with the city. I couldn't believe their plan meant that the pool -- essentially in my backyard, a five minute walk from my apartment -- would be out of commission for several years.

I was all prepared to wave the outraged civic activist (and swimmer) flag inherited from my late parents - who in the 60's had lobbied my hometown to build a municipal pool complex.

Then I looked around and discovered that, along with fellow lapswimming diehards, there were also equally annoyed hockey players, birders, and environmentalists, all with their own sets of grievances. 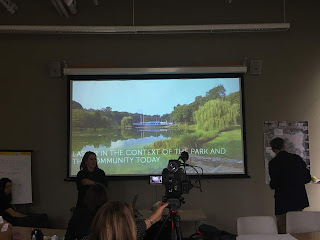 The Park's Chief Landscape Architect Chris Nolan and his architect team heard us out. Then they presented a slideshow of their $150 million plan. (Nolan explained that he had joined the park in 1996 expecting to stay only a couple of years. Instead he has made it his life's work.)

They wanted to remove the mid-1960s cement Lasker Rink that had landed in the park like an alien spaceship, cutting off a natural stream and creating an eyesore for anyone emerging from the beautiful Huddlestone Arch.

They walked us through the site and made a pretty convincing case.

The new pool would resemble a pond, be much more integrated with the landscape, and well - just look at it! 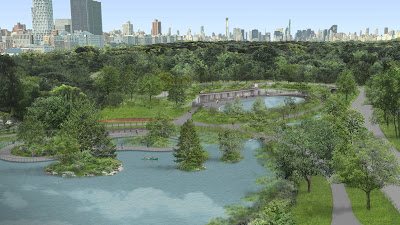 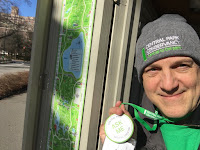 By the time they finished, I was not only in favor of the project, I had signed up to attend an open house for volunteers. In a few months I would learn to be a greeter in the visitor kiosks and centers. (right)


But after hearing the history of the mid-1850s decision by city elders, worried about the population boom downtown of poor immigrants, to build an entirely manmade version of nature, I decided to further train to be a weekly "Iconic Views" tour guide. I ended up donating more than 100 hours of my time in 2019 to the Park.

One rainy day I had only one couple on the tour with me, a retired couple from Manhattan Beach California. After hearing the whole tour, the wife touched my arm and said "This gives me hope for humanity."

Then a few days ago, my younger daughter deejayed her first college radio hour.

She dubbed the show "Tiny Apocalypse" and touted it with the following pitch: "feel like the world is ending? what else is there to do but dance and listen to music that makes you feel good?" 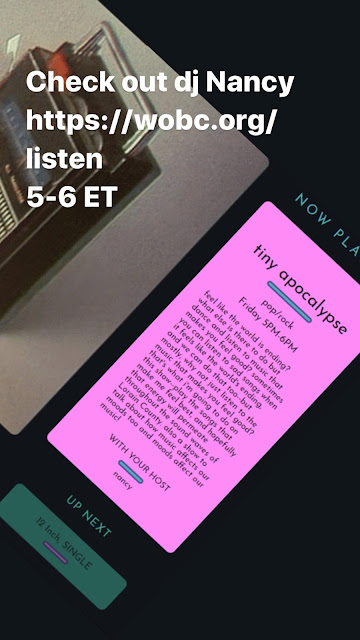 Good piece, and delighted to hear that the Handelman DJ gene continues to thrive!

Love the bit about swimming pools! My mother was a tremendous advocate of swimming - we had a great public pool but she was upset that the public schools didn't all have their own like high schools used to (or maybe still do) in the midwest. One of my favorite things Mom gave me was this love of swimming. :-)

This piece is so important, David. Thanks for the insights.

This is wonderful, David. Posting, and having one-on-one discussions with friends, about art and culture also serve as curative bridges to each other. Thanks!