Get Me (Anthem) Rewrite! 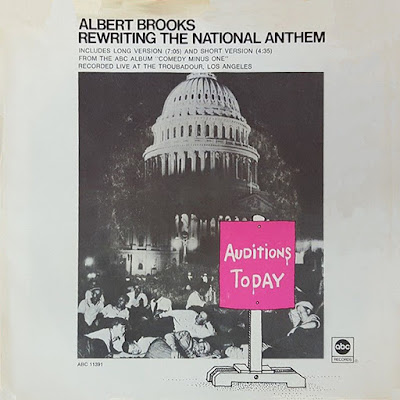 In his first 500+ days in office, the President's war against disrespect for the National Anthem has become one of his reliable go-to chestnuts, a greatest hit with a dog whistle chorus that he sings with panache to keep the crowd in his pocket.

But today he took it to another level, by claiming the song is actually good. And I couldn't help thinking comedian Albert Brooks had it right 45 years ago when he did a routine suggesting we needed a national contest to pick a new one, and how that might go.

Since Trump himself is the master of reality TV, maybe it's time to revisit the idea.

After the President learned that only a handful of the Super Bowl Champ Philadelphia Eagles were going to show up for his White House celebration, he disinvited them, claiming (in a third-personese statement) to do so because the players disrespected the Star-Spangled Banner:


“They disagree with their President because he insists that they proudly stand for the National Anthem, hand on heart, in honor of the great men and women of our military and the people of our country.”

Of course, fact-checkers immediately pointed out that in fact, none of the Eagles on the roster had taken the proverbial knee the entire championship season, but never mind.

Trump rejiggered the ceremony to be a celebration of America, and his early morning tweets began praising the Anthem itself as a wonderful/great piece of music.
7:08 AM: 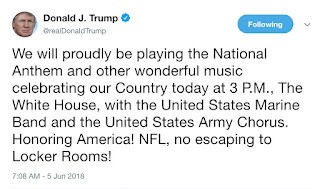 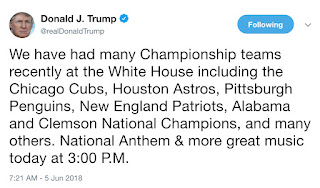 But as Trump supporter Roseanne might be among the first to attest, the National Anthem is a difficult thing to sing, both clunky and wide-ranging. And though the lyrics were written by Francis Scott Key during the War of 1812 to an old oft-used tune, it wasn't even crowned our Anthem till 1931, and was toyed with endlessly over the years. As the NY Times has reported,

In the 19th century, the tune was regularly refashioned with lyrics to be, alternately, a rallying cry for abolitionists (“Oh, say do you hear, at the dawn’s early light, The shrieks of those bondmen, whose blood is now streaming”) or a temperance-movement indictment of alcohol (“Oh! who has not seen by the dawn’s early light, Some poor bloated drunkard to his home weakly reeling”).

So in 1973, when Brooks, then 26, did a routine suggesting America rethink the tune - it had only been in its esteemed slot for 42 of America's 197 years. (And Nixon was one year shy of resigning over Watergate.) 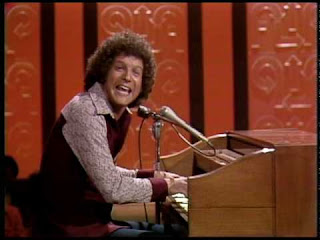 (When I wrote a career tribute to Brooks seven years ago, I embedded a video of him performing it live that since has been removed from YouTube in America due to copyright reasons, so you're going to have to listen to it. Pretend it's a podcast!)

Prophetically for today's climate, Brooks begins his routine - recorded live at L.A.'s Troubadour -  by saying "The National Anthem - What happened? Oh, someone got up! No, no. You don't have to stand."

Then Brooks declares the anthem has to be rewritten "very soon"
because "Nobody sings it on the way to work any more." And he asks, what's the fair way for it to be rewritten? Give it to the country's most popular songwriter at the time, Burt Bacharach? He quickly proves that would be a disaster.  (Who would today's equivalent punchline be, Taylor Swift? Kanye?)

Instead, Brooks says, it should be open auditions - kind of an American Idol before its time. He then acts it out, playing plays both the host and the entrants, giving them only a few bars, Gong-Show style.

"Ted Rutherford, Dallas,Texas" sings a tune that Trump would probably like:  "Hey, World! / Look at us! / We're the greatest!"

"Leroy Williams, from any ghetto you choose" quickly hammers home a point even more valid today: "You jail / all your blacks--"

I could transcribe the whole thing, but it's really worth hearing Brooks' performance. Especially the Vegas meandering schmaltzmeister doing "I've Gotta Country."

Maybe the President can produce the Anthem-audition show and put on hold his other fall pilots, Summit On Again-Off Again, Everybody Hates Jeff, and Pardon Me! 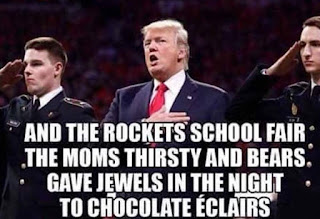 UPDATE: Meanwhile when the event happened, the President seemed not to know the words to another on his "wonderful" playlist, "God Bless America":

Anthem submissions welcome in the comments. 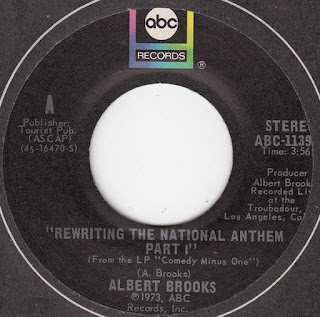 Posted by David Handelman at 4:07 PM

I am going to try my hand at rewriting the anthem. I'll get back to you. In the meantime, great post. How cool is it that "Rewriting The National Anthem Part One" was a single?