My whole life, I've been cursed with a kind of OCD-level need to correct the universe.  I have an almost comic inability to enjoy something I am reading or watching or listening to -- even a museum note about a painting -- if there's a glaring error involved.

At least -- to me it's a glaring error. I'm sure most people gloss over it, or just let it go.

I've joked that since the rise of the Internet and all its sloppiness, I see my main role as its sole copy-editor.  But I DO send emails to writer friends about mistakes in their articles or headlines (since these days they can be fixed). I have tweeted to authors I don't know about their mistakes. I'm trying to keep the world safe from perpetuating - let's not call it fake news -- just ignorance.

It's exhausting. And I'm not proud of it. And it's probably cost me a couple of jobs where I just should have kept my mouth shut. I kind of think of it as my Wile E Coyote impulse. There's an old Roadrunner cartoon in which Wile E has programmed a piano to explode as soon as Roadrunner pecks on a certain key. He leaves sheet music on the piano. Roadrunner comes over and plays it wrong several times. After cringing, the increasingly furious Coyote bursts forth, pushes the bird aside and pounds out the correct sequence, blowing himself up. (Update: this was apparently the FOURTH time a Warner Bros. Cartoon used this joke, leading me to think Chuck Jones hated the song from childhood piano lessons.)


With all the accusations of falsehoods bouncing around the world in 2017, easily fact checkable misinformation should not be out there.

I understand how this kind of oversight can happen in the rough and tumble of journalism, with its increasingly breakneck deadlines, but it's still no excuse -- like when, for example, my one-time employer and music bible Rolling Stone published a remembrance by Rickie Lee Jones about Steely Dan co-founder Walter Becker, and she misspelled the other guy's name as "Fagan" instead of Fagen. Or, in the obit for Rod Temperton, initially called the hit he wrote with Michael Jackson "Rock with Me," instead of "Rock with You." (Both I sent notes about, and both now are corrected. Was it my doing?) I also corrected a friend's assertion about who had read a statement from Bill Cosby's wife after his mistrial. The friend was grateful, having had to file the piece from an airplane.

But it's always a little more confounding to me when an error pops up in a movie or a TV show. After all, not only did the people on the set all hear it and see it -- the script had to get through many incarnations and
get notes and revises from the lowest-level people who proofread them and keep track of consistencies, to the network or studio executives who sign off on them. I find it hard to believe that nowhere in this elaborate chain of command did anyone scratch their head and say "can you check that for me?" ESPECIALLY in the age of the Internet.

One of the classics I always think of is one of the most famous speeches in the movie "Bull Durham" in which Kevin Costner makes a passionate, foul-mouthed stand for what he believes in, and the one nod to literature that writer-director Ron Shelton put in there is that "the novels of Susan Sontag are self-indulgent, overrated crap."


At the time Bull Durham came out, 1988, Sontag had only published a grand total of two novels -- The Benefactor (1963) and Death Kit (1967). (She published two more, better-received ones years after the movie - I like to think as a fuck you to the movie?) Her reputation was as an essayist. So why out of all the writers to pick on? It still baffles me.

I had two more such moments recently watching shows I like by TV creators I admire, and both moments undercut my ability to immerse myself in the rest of the programs.

The first was in the pilot of David Simon's The Deuce, set in 1971 New York City. (I posted screengrabs at the top of this piece depicting the moment.) One of the twin brothers played by James Franco, Frankie, approaches his bookie about putting money on the Mets-Reds game, and asks who's pitching. "Seaver?" (Tom Seaver, the Mets ace and my childhood hero.)

But the bookie replies, "Tug."

Now, David Simon is one of my biggest heroes and idols. He began as a hard-working journalist, and turned his experiences into Homicide, The Corner, and The Wire, and has continued to mine real-life stories for some of the most important work on TV looking at our society. I even nominated him to be on the WGAE Council this year, and he decided to run -- and I was happy that he defeated me!

But -- maybe because he's a Baltimore guy? -- he got this one terribly wrong. And it took me out of the story.

Tug McGraw (may he rest in peace) began his career with the Mets in 1965 as a starting pitcher, but a terrible one. By 1971, he was their bullpen ace -- a reliever. Whereas, Nolan Ryan was a starter on that team. Or if Simon wanted a funny punchline he could have said "Ray Sadecki."

Before I wrote this up, I wanted to triple-check that The Deuce script was, in fact, wrong. I saw that Tug did, in fact, for some reason, start one of the Mets 162 games that year, and I briefly had faith that Simon had actually planted an Easter Egg for just my kind of nitpicking nonsense.

Then I looked at the Mets-Reds games played in 1971. There were 12 of them. Seaver started 3 (and even relieved in one). Ryan started two. Gary Gentry started two. Jon Matlack started two. Sadecki, Jerry Koosman, and someone named Charlie Williams each started one.(My brother informs me Williams is who the Mets would trade for Willie Mays at the end of his career)

While I was pondering whether to tweet this to Simon or let it go, I watched the season 5 premiere of Episodes, on HBO's rival Showtime, which was created by David Crane of Friends and Joey and Jeffrey Klarik of Mad About You -- which is all about Matt LeBlanc playing himself as the former star of Friends and Joey now going down the ladder of Hollywood fame into the murky depths of compromise and crap. For all its cartoonish exaggeration, it is one of the more painful and accurate depictions of what it's like to try to make a living where everyone is cretinous and insecure and powergrabby.

But in the season five premiere, Matt LeBlanc offers his former two showrunners tickets to a Madonna concert, bragging that he had met Madonna at Andy Warhol's factory in the 80s -- and when questioned about knowing Andy Warhol, he retorts that "Blondie introduced us."
I don't even know where to begin with this one, but let's start with this: The Factory's last incarnation shuttered in 1984. The following year, 1985, LeBlanc (since we're talking about Matt LeBlanc here, not a character) graduated from high school in Newton Mass (same class as Louis CK!). He did his first national commercial in 1987- -the same year Warhol died.

Since Matt LeBlanc signed off on saying all this, maybe it's, I dunno, some kind of version of the truth. Or a parody of this kind of bragging. I'll let it pass.

But then this: "Blondie introduced us."

Does LeBlanc mean the whole band? Because the band Blondie broke up in 1982 -- when LeBlanc was 15.

I am pretty sure he's referring to Debbie Harry, the lead singer of Blondie. Did or does anyone -- particularly people who actually know her -- call her "Blondie"?

I do not believe so.

As I am watching this, I am trying to give the benefit of the doubt, it's just a comedy, let it go, David.

My best-case scenario? Maybe the script originally said "Debbie Harry," but someone (young) gave the note "Nobody knows who that is." and when it was explained, the compromise was "Just say Blondie." But with so many other names that could have been dropped -- why stick with this awkward one, when the rest of it already seems utterly nuts?

With this many questions rattling around my head, I start to hear that Wile E Coyote piano tune, drowning out the rest of the dialogue. (As I did when I saw the daughter on The Americans put a coin in a payphone before picking up the receiver - see below.) 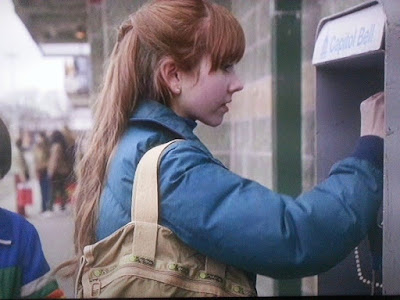 Ignorant people referred to Debbie Harry as Blondie. But yeah, I doubt someone who knew her would do that.

But these are the mistakes that bother you? Have you ever watched a cop show that takes place in NY? (Other than L&O which gets stuff right)

I know that shows deliberately fake addresses- like 290 E or W something street (for those who don't know, numbers start at the next hundred every block, so it's rare that there's a #290, etc.). But they sometimes are way off, like 700 East something street (which would be in the river). Or they have intersections that don't exist, like 7th Ave and 72nd St (7th Ave goes only as far north as 59th St).

There are usually so many NYC errors that I'm shocked nobody on the production who's ever lived in NY didn't say anything.

This is very funny. Firstly, I know EXACTLY the tune Wile E chooses to place on the piano without needing to watch the clip. It's freaking genius and hysterical and imprinted on my brain forever. Secondly, I do this too, with text rather than telly/film, and it's spelled 'defeated'.

Shaun -- I long ago learned to grant them the fake addresses and phone numbers (though I cringe whenever I hear "555" -- thats a legal issue, they dont want to give out a real address that some psycho will want to show up at. And locations are always fudged for practical reasons -- the movie "Across 110th Street" is hardly ever ON 110th street.

Finally, it has been pointed out to me on Facebook that the Roadrunner cartoon I remember from my childhood was in fact the FOURTH iteration Warner Bros. Cartoons did of the same bomb-note joke -- using the same song!
https://youtu.be/h1rXcm2mbKI
The same bomb joke: Believe me, if all those endearing young charms

Remember that game in 1971 that Tug McGraw was *supposed* to start, but they pulled him...?
Great piece.

My favorite thing about Kindle is that I can send corrections.

All the rest I grant you (this from a woman who not only proofreads The NY Times over breakfast but idly kerns its headlines)' but there are 290 and similar addresses all over Manhattan, mainly on the East Side, midtown to downtown. I lived in one long ago.

I could spend half my life (and do, come to think of it), posting just factual corrections to what people say online regarding the Hiss case. I ventured into intended fiction on one occasion, however, when I engaged in an exchange with Aaron Sorkin about his West Wing Hiss episode, which was clearly based on the case. I can't recall the name of the episode, however, but when I do occasionally think about it, I wonder if O'Donnell had something to do with it, considering his work for Daniel P. Moynihan.

Valuable perspective, honestly. because as you say, these kinds of details do take us out of the world being built. I wish I could remember the one like this I saw a few days ago. Infuriating and also human.