Today came the news that the last surviving World War I veteran died at the age of 110.  This reminded me how, suddenly, World War I seems to have re-upped in pop culture consciousness. It's been a wakeup call for me, as for most of my life I have been swamped by Baby Boomer novels and movies romanticizing World War II (and codifying Hitler as the bad guy of all time).

"The Great War," in contrast, had faded to a kind of dusty prelude -- perhaps in part because there were less photos and films of the battles.

The current revival round up has to start with -- I'm almost embarrassed to mention -- the ubiquitous Downton Abbey, the BBC miniseries airing on PBS.

But it's also the setting for Spielberg's movie War Horse (which, sorry, I couldn't get through), and even Hugo finds its historical footing in filmmaker Georges Méliès falling into despair and disfavor after the "Great War" and burning all his movie props [above]. 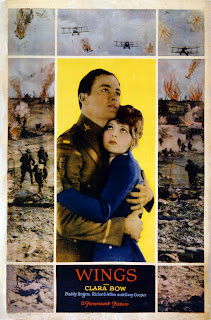 Yet the depiction of WWI I enjoyed more than all these recent examples was a restored print of the first Oscar-winning best picture, 1927's silent Wings, just released on DVD.
Shot less than a decade after the war it depicts, Wings contains a couple of moments that made me wonder if Downton creator, Julian Fellowes, had watched it for research and inspiration, or at least was already familiar with it. [Update: the production also lucked into preexisting WWI trench replicas built by British war nerds.]

At an Academy screening in L.A., William Wellman Jr., the 73-year-old son of the movie's director, described Wings as "The Star Wars of its time." It boasts amazing, actual aerial photography, which put viewers in the POV of a pilot.  Wellman senior -- who had actually been a WWI pilot -- had been unhappy with the first several months of filming and junked it, and the cost ballooned to $2.1 million -- five times the era's average budget.

After a slow, corny soap-opera start,  Wings soars, aided by the bracingly modern Clara Bow, the biggest star of the era. The brutal, epic battle scenes remind how primitive WWI warfare still was. You see men in pathetic tin hats running across acreage being mowed down in ways that probably aren't that different from the Civil or even Revolutionary wars.

But the movie itself is surprisingly modern. There's a plotline about friendly fire and several brazen pre-morals code moments, including bare asses and a tender male-to-male kiss. My favorite: the camera tracks overhead through several tables at the Folies Bergere; at one of them sit what looks pretty clearly to be a lesbian couple [right].


In one battle scene in Downton Abbey, a soldier in the trenches jinxes his chances for survival and then dies a few moments later. Watching it, I found it a little corny.

Imagine my surprise when I saw the same theme in a Wings's most famous scene -- the debut of Gary Cooper (above) in a short cameo so indelible that he renders invisible the two putative stars of the movie, Richard Arlen and Charles "Buddy" Rogers.

SPOILER ALERT: When the men discuss their good-luck charms, Cooper cooly says he doesn't bother with such superstition, that "When your time comes, you're gonna get it." A few moments later, he proves his point.

Now -- about that lucky charm. 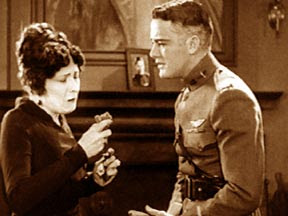 In Wings, Arlen's overprotective mother has given him a tiny stuffed bear from his childhood [above], and he keeps it with him...and it seems to work...until....

In Downton Abbey, when Matthew is heading off to combat, Lady Mary gives him a small stuffed dog [below]. Now, this is probably coincidence, and lots of soldiers had good luck charms, but still: stuffed miniature animals? I wonder.... 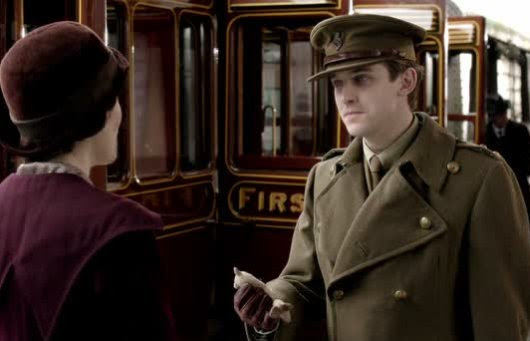 Not that there's anything wrong with such homage or even theft: there was a lot of hullaballoo about this year's Oscar contender The Artist "stealing" music from Vertigo, and scenes from everything from Citizen Kane to Singing in the Rain. But isn't that almost required of a movie about moviemaking? I was more put off by the recent TV pilot for Alcatraz stealing Vertigo's entire rooftop leaping/partner losing grip and plummeting to death sequence. Yes, they're both in San Francisco, but I'm not sure what else it does besides take savvy viewers out of the moment and wonder if there's been no advance in stunts or screenwriting in a half-century.

Which is a roundabout way of complimenting Wings. The modern viewer often goes into these movies ready to find them quaint or tinny. But the battle scenes -- while much larger in scale -- are not at all technically inferior from the way Downton staged them -- and the aerial scenes are, if ultimately a little drawn out and repetitive, authentic and beautiful in a way that today's CGI can't quite match. In this case, the Oscar has held up nicely, thank you.

I like the photos you used, the two-shot comparison - Wings shows proscenium style acting influence, and DA shows contemporary camera staging. It's kind of sad how actors gravitate to, and get stuck in, these positions nowadays in pretty much everything. It's time to re-revolutionize the two-shot I say...

for the WWI revival - it's been going on for a while. Look at the nominations for foreign film -
Joyeux Noel - 2005
the pretty successful movie with Audrey tatou (featuring jody foster) - A very Long Engagement (two noms but not foreign) and for the last two years, Discovery's The Military Channel has been running a fantastic 8part series, THE FIRST WORLD WAR using film footage that's astounding from archives all over the world.
interesting.