Saturday Night Live didn't invent the snarky-affectionate pop culture spoof -- it was following in the grand tradition of Mad Magazine, Ernie Kovacs, Laugh-In [above] the National Lampoon and Monty Python.

But last week I was reminded of one reason why SNL has outlasted them all -- 37 years and counting -- in creating (and re-creating) satirical memes before we ever starting using that word.

On Weekend Update, Andy Samberg donned his Nicolas Cage makeup for the umpteenth time to spoof the actor's over-amped style and seeming inability to reject any script. But there was a new twist: Cage, who had another crapola movie opening that weekend (Ghost Rider II), showed up in person to participate in his own caricature.

This is the kind of water cooler moment that the show loves to create, the "did you see that?" freak-out that, in the era of Hulu and YouTube, keeps a show current even when people miss the original broadcast.

But this kind of codification seems counterproductive.
If the satire is so toothless that the subject can sit next to you while you're doing it, what, exactly, is the purpose? Are we more impressed with the impersonation, the celebrity appearance, or had there been some kind of actual point back when the idea for the bit was hatched?

SNL has wrestled with this issue since its inception: Are we commenting on showbiz, or just part of it? The most brutal example I can recall is from the very first year, when John Belushi brought the infamous, mannered, spastic Joe Cocker impression he'd been doing at Second City onto national TV. Cocker was the musical guest and began singing "Feelin' Alright" sincerely, Belushi came out and matched him, grimace for grimace. It was uncomfortable -- in a good way.

Because of its longevity, SNL is now a bigger star than almost any of the stars who appear on it. It has long been a coveted launching pad for movies, TV shows, albums, and political careers (or comebacks). But part of me wishes they wouldn't invite the real people there. Because there is still a value to satire and think it gets undercut if the person appearing to be lampooned is all okay with it.

For me this reached a crucial turning point when after Tina Fey had been massacring Sarah Palin with her impression, Palin herself suddenly showed up and hung out backstage and came out to give her winking benediction. 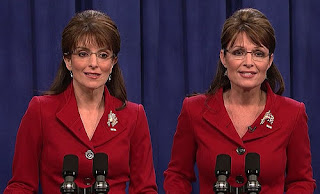 It seemed like the roles had reversed from the Belushi era: instead of Cocker being uncomfortable, Fey looked like the one who was back on her heels.

It grabbed headlines, but blunted the impact of any content.


I understand why it's more impressive to have a real person show up than to put a comedian in a wig and prosthetics. But on the other hand, when Richard Nixon went on Laugh-In to say "Sock it to Me," he preemptively co-opted any kind of satirical grenade they might toss his way. I  know it's just a comedy show, but sometimes I don't know if the trade-off is worth it.
at February 21, 2012