I Couldn't Believe My Eyes 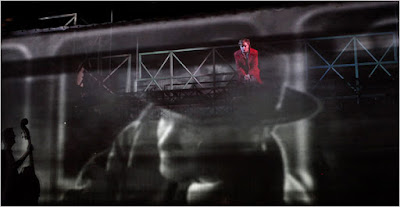 I was sitting in a theater last Thursday, marvelling at the visual inventiveness of the British production of Brief Encounter, when I rubbed my right eye -- and the whole stage dimmed about 75%. I did it again and realized that my left eye had a huge floating fuzzy spot in the center of my line of vision.

Holy crap.
By the dramatic end of the show, I was emotionally drained, but only partly because of the ill-fated lovers onstage.

As I've aged, I've often debated whether losing hearing or eyesight would be worse -- and decided I'd rather lose hearing -- partly because I'm already on that path.  I started missing parts of conversation and turning up the volume on the TV (and finally resorting to subtitles). 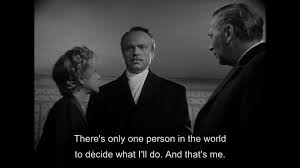 I saw an ear doctor who told me my right ear has about 15% hearing loss, especially at high frequencies, and that the loss of "cilia" inside the ear was irreversible. Whether it was from too many rock concerts as a kid, or headphones, or hereditary (my dad was an inveterate shunner of hearing aids, much to everyone else's dismay), I was going to lose hearing.

I came to terms with it, even humbly trying a pair of those assisted hearing earphones when I sat in the back row of a play. 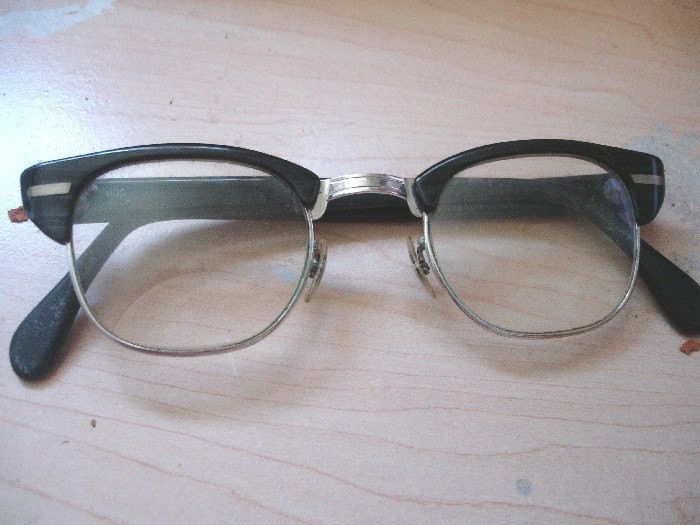 I actually have gotten through most of my life without even wearing glasses, except for between first and third grades, when I wore hornrims for astigmatism in my left eye. Then my sight "got better," and I've passed eye exams ever since.

Of course, recently I had the typical middle-aged struggles with menus in dimly lit restaurants, or the tiny font on a cell phone. (And, yes, Playbills in Broadway theaters). I broke down and bought reading glasses, but usually forget to bring them anywhere. 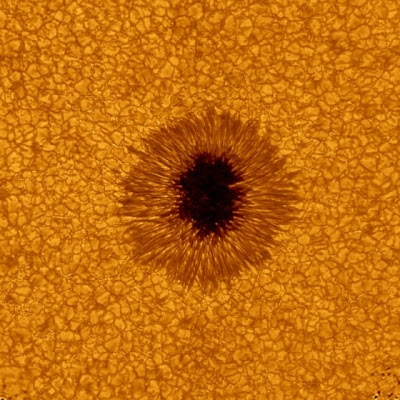 This dimming of my eye, however, came out of nowhere, and so of course at first I was in denial. I decided it was the aftereffect of a meeting I'd had a week earlier in an office where the sun was setting out the window; I self-diagnosed it as a "sunspot" that would fade. Because that's what it looked like. [Right]

But through a full Friday at work, it didn't. If I closed my right eye, I couldn't see what I was typing on the computer.

So Saturday morning I put out feelers for opthamologists, and then remembered that at a high school reunion, the women had all swooned for a classmate who now was doing lasik surgery and providing eyewear to developing nations. I emailed him, he sent me his cell number, and I described my symptoms. He told me he's not comfortable diagnosing over the phone, and that I should make an appointment for first thing Monday morning, but thought it sounded like I had Central Serous Retinopathy,  which usually clears up on its own in 6-10 weeks.

The condition didn't improve over the weekend, so by the time I rode my bike to his office Monday morning, I was looking at the autumn leaves in Central Park, wondering if this was the last time I'd see them in 3-D. I actually stopped my bike at The Pond, where I used to go for lunches when I worked at Rolling Stone in the 80's, and took this picture with my phone: 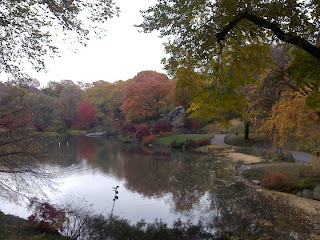 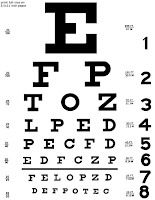 When I got to his office, I read some charts, the right eye was fine and the left eye, I could only see the largest letter, and there were wavy lines around the edges. My 20/30 vision had ballooned to something like 20/150.

He started doing more and more tests and pictures of my eyes, and I started to feel like I was in Gaslight

. He spoke in hushed tones with a colleague, and then told me I needed to see a retinologist -- RIGHT AWAY. I was immediately thinking I had a brain tumor. But no, he said it looked like Retinal Vein Occlusion, a build up of blood behind my eye, not draining, interfering with the workings of my retina.

He explained it has causes like high blood pressure or diabetes and has a much more uncertain return to normalcy. And he was particularly concerned because he saw a sign of it around the fringes of my right eye too.

As you might imagine, by the time I took the subway down to the retinologist, my blood pressure couldn't have been higher. I met with an intake assistant who asked about family history, and then a technician, who took pictures of my retina with a bright flash that would have blinded anyone, and who then put a needle in my arm to put a dye in so it would go behind my eye (which took only seven seconds) to get a better read on what she saw. I was told it would turn my urine flourescent yellow. Fun! 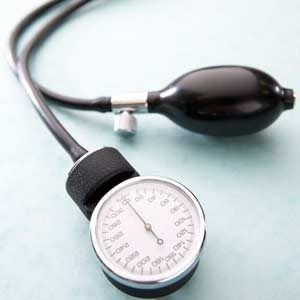 The retinologist looked at my eyes and told me many facts. At the time I hung on every word, but now can't quote them back. She said I should see my GP "Right away, today."

What she wanted was for him to check my blood -- for diabetes, BP, and other things -- all of which were tested back in May and were fine, and if anything I have been healthier since then, cutting out Diet Coke from my diet, etc.

She also told me that trying to help my recovery, there were two injections she could give me, one of which is an off-label use of a drug made for macular degeneration, which costs $50 a dose, and a new one just approved by the FDA for my condition, which costs like $2000 a dose, which meant it would take a few days to get my health insurer to approve it.

After we discussed the pros and cons, I said let's just do the cheaper one now and get going on the cure, instead of me having to wait three days (in order to give the drug company extra cash).

Then came the actual injection. When I was in college, I fell in love with Kubrick's film A Clockwork Orange. I went to see it every time it showed at the local revival house. One Halloween some friends and I even dressed up like "Droogs." I was not affected by the ultraviolence perpetrated against women, the elderly, etc.

But I always got squeamish during  the scene near the end when Alex is being "cured" of his ultraviolence by having his eyes propped open, and moistened with drops, to force him to watch movie scenes.

And yet here I was, lying back on a chair, and the doctor propped my eye open, applied  drops of painkiller  "this is going to sting a little bit" and then -- please sit down -- PUT A NEEDLE IN MY EYE.

It felt like a poke or a pinch. And then it was over.

After making the requisite followup appointments and having her call my GP, I went across the street and got some low-dose aspirin (to thin my blood, just in case), and some eye drop antibiotics. I had some pizza. Then  went up to my doctor.

He looked listened and took blood and blood pressure; by the time I left, and he told me I probably didnt have the diabetes or hypertension-related version. Voila! My blood pressure  had calmed down to 130/80. 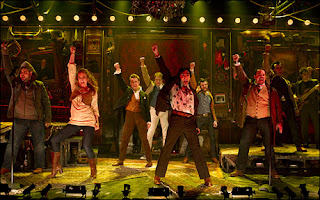 That night, I went out to another Broadway show -- Bloody Bloody Andrew Jackson. I don't know if I found the bloody part as funny as I might have a few days earlier, but I was happy for the distraction.
Today I returned to work, still, for all practical purposes, one-eyed. I eschewed wearing a patch, and my eye is just closed a little compared to the useable one. I will get  the blood test results later this week; I am going back for more eyeshots once a month.

In the meantime, when I remember to, I am savoring sights with an intensity bordering on the immobilized protagonist in The Diving Bell and the Butterfly

For now, the hearing aid can wait.

Wow, David.... good luck with this.
It's unsettling, to say the least, that everything is cruising along just fine and suddenly something shifts and is very wrong. You've had a bit too much of that over the past few years.
I hope this proves to be a fleeting condition.

Scary, David. Similar things have happened to family members....but being on top of things....as you are....led to positive outcomes.
Wishing you the same.
Marion Levine

I'll be interested to know how this works out. Six years ago, I had the same problem -- a large shadow in my left eye that looked just like a hot-air balloon. Like you, I figured it would go away. Finally, though, I went to the eye doc and ...was diagnosed with wet age-related macular degeneration. Arghh. Had laser surgery which destroyed a bit of vision in the center of my left eye, leaving a gray area that my right eye "fills in" for my brain. This was just before they came up with proper treatment (injections and such) for WARMD. Over the years, I have sort of gotten used to it, but it does make me sad. For almost all of my life, I had perfect vision. Anyway, best of luck with this and keep us posted!See More

I sure hope the "needle in the eye" treatment helps you to recover. It's so ironic to me. I saw your photo of the pond in the Park, and was struck by the absolute beauty you captured. Then read your blog the following day to find out the story behind it. It makes me appreciate the photo even more.
Sending you good thoughts, and hoping the procedures heal you.

Hope you remembered to cross your heart and hope to die at some point during the day, as well. You may not get that opportunity again.

Getting older blows. Sorry you're going through this.

Wow! Thanks, David, for the detailed narrative. I am glad that you are seeing a little improvement and hoping that they soon get your binocular vision restored. I know how it feels to have things just go 'wonky' all of a sudden. We'll let you and Syd know asap what the doc finds tomorrow when he dives down into my lungs with his scope!
love, jim

Found my way here via a rare visit to Facebook. I'm wishing you well.

Mohamed had retinal detachment a long while ago--similar symptoms--and ended up in surgery within hours. I'm glad it wasn't that. Keep telling everyone with spots or curtains across their vision to see the eye doc ASAP.

Very scary. And strange. This happened to another friend of mine just last week. I hope you both have swift recoveries from this. You'll let us know how this goes, yes?
Best,
Eliza

That's terrifying, actually. You manage not to seem terrified in your post, which I can't tell if that's because you're downplaying it or you actually weren't feeling it.

So glad it wasn't retinal detachment, though this definitely isn't fun, either.

The act of writing about it (and pulling in fun illustrations and a soundtrack song) made it less scary somehow.

And hearing from so many people here and elsewhere has also helped.